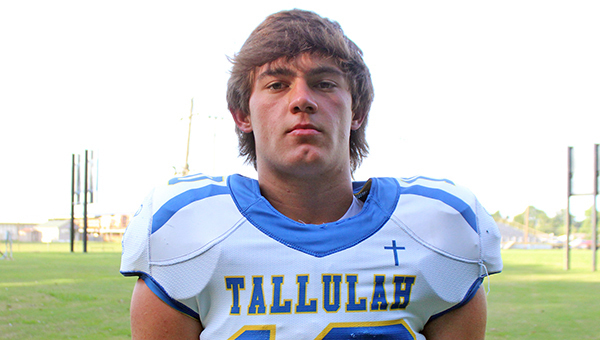 Tallulah Academy football player Dee Morgan ran for a touchdown and scored another on a fumble return to lead the Trojans to a 44-16 victory over Prentiss Christian in the second round of the MAIS Class 2A playoffs on Friday.

Tallulah Academy’s well-oiled football machine showed some rust when it was put back in motion following a week off. It wasn’t nearly enough to seize it up, though.

Tallulah got a kickoff return touchdown from Brayson Morson and a fumble return TD from Dee Morgan to help overcome a slew of penalties, and defeated Prentiss Christian 42-16 in the second round of the MAIS Class 2A playoffs on Friday.

The Trojans had several touchdowns negated by penalties, but still were able to pull away after going into halftime tied at 16. They won their sixth game in a row and beat Prentiss Christian (5-7) for the second time this season.

Morgan and Wyatt Bedgood also scored rushing touchdowns for Tallulah, but it was Morgan’s fumble return TD in the third quarter that turned the momentum squarely in the Trojans’ favor.

Landon Wells sacked Prentiss Christian’s quarterback to force a fumble, and Morgan scooped and scored to put the Trojans ahead 36-16.

“It was a close game until that,” Wood said.

The victory sent Tallulah Academy (9-1) to the playoff semifinals for the fifth time in eight seasons. It will host Newton Academy (10-1) next Friday at 7 p.m. with a trip to the Class 2A championship game on the line. Tallulah is trying to get to Jackson for the fifth time since 2015.

Newton beat Christian Collegiate Academy 40-34 on Friday, but lost 52-22 to Tallulah three weeks ago in the regular season.

“They’re well-coached and have a good team. We just jumped on them,” Wood said of the previous meeting with Newton. “I don’t like playing a team twice in a season.”