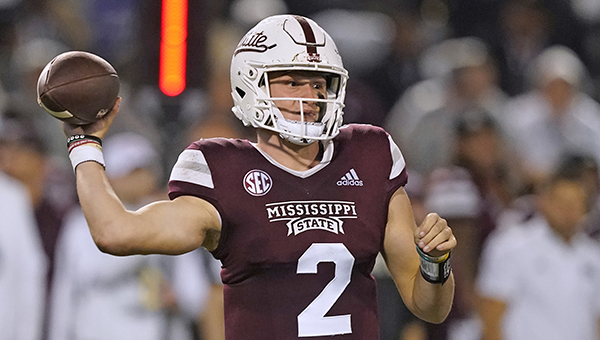 STARKVILLE — A year ago, Auburn had a 28-3 lead in the first half against Mississippi State only to see the Bulldogs make a stunning comeback. Saturday’s rematch was playing out the same way in reverse.

Mississippi State built a 24-3 lead in the first half but the Bulldog offense stalled for about 2 1/2 quarters and Auburn had two different leads in the final five minutes. Ultimately, the Bulldogs sent the game to overtime on a Massimo Biscardi 44-yard field goal and a 6-yard Jo’Quavious Marks touchdown run walked off the win, 39-33.

“It was good at the end and good at the beginning. The defense, I thought, kept us in it,” Mississippi State head coach Mike Leach said. “Wins are hard no matter who you are and sometimes there are games like that. The toughest teams stick through it, battles and wins.”

“I tip my hat to Mississippi State. Wow, what a game. Those kids fought hard,” Williams said. “You’re not going to win them all, but I’m so proud of my guys. There are so many life lessons that these kids are going to learn.”

Will Rogers broke Dak Prescott’s Bulldogs career passing yards and touchdowns records in the first quarter. But the Bulldogs’ offense was stuck in neutral for most of the rest of the ball game — until it mattered most.

State built a 24-3 lead in the first half only to see the Tigers work their way back into the game in the third quarter with 13 points thanks to a dropped snap on a punt and an interception from Rogers that closed the gap to 24-19.

The Tigers were able to take their first lead of the game with 6:36 left when Tank Bigsby broke off a 41-yard run to take the 25-24 lead. After Rogers’ 33-yard pass to RaRa Thomas put MSU up 30-25 with over three minutes left, the Tigers scored again in the final minute and took a 33-30 lead.

Biscardi tied the game and the Bulldogs recovered the ball on the ensuing kick after Ben Raybon hit the ball off an Auburn defender. MSU missed the 56-yard field goal and that sent the game to overtime.

Auburn forced three turnovers from Rogers as the quarterback threw an interception and fumbled on two of Auburn’s five sacks.

Mississippi State outgained the Tigers 370-331 almost exclusively with the passing game. Rogers was 42-of-59 passing for 357 yards and three touchdowns with the one interception.

He surpassed Prescott’s school record in touchdowns and now has 73 in his 31 games. He also broke Prescott’s passing yards record and sits with 9,627.

The win for the Bulldogs sealed a bowl game appearance for the 13th consecutive season which continues what’s a school record streak.

Carroll scored on an 18-yard run and twice more from short yardage. Darren Grainger threw for 133 yards and two touchdown passes and added 143 yards on the ground on 13 carries. Jamari Thrash made two touchdown catches and had 60 yards receiving.

Frank Gore Jr. had a 43-yard touchdown run that pulled Southern Miss to 28-14 late in the third quarter and finished with 87 yards rushing.

Georgia State scored on its next two possessions after Gore’s touchdown to put the game out of reach early in the fourth quarter.

Jackson State 41, Texas Southern 14
Shedeur Sanders passed for three touchdowns and ran for another, Sy’veon Wilkerson had 26 carries for a career-high 214 rushing yards and two TDs, and Jackson State beat Texas Southern.
Sanders finished 23-of-30 passing for 252 yards with no interceptions.

Jacorey Howard scored on a 10-yard run midway through the third quarter that trimmed Texas Southern’s deficit to 21-14 but Sanders answered with a 2-yard TD run less than 2 minutes later and added TD passes of 7 and 9 yards to Shane Hooks to make it 41-14 with 14:19 to play.

Howard finished with 14 carries for 38 yards rushing and added a 25-yard touchdown receptions for Texas Southern (4-5. 3-3).

Delta State led 42-24 after Patrick Shegog threw a 5-yard touchdown pass to Jordan Jernigan with 10:45 left in the game. Shegog finished 22-of-31 passing for 287 yards and four touchdowns, and ran for a team-high 80 yards and two TDs.

Dohnte Meyers had eight receptions for 102 yards and a touchdown for the Statesmen.

Frost sparked West Georgia’s comeback, however, with a 24-yard TD pass to LaPerion Perry with 7:56 to go. Delta State went three-and-out on its next possession, and West Georgia (7-2, 5-2) answered with a 43-yard TD pass from Frost to Zay Britt and a two-point conversion to cut it to 42-39.

Delta State fumbled deep in West Georgia territory with just over a minute to go, and Frost led them down the field for the go-ahead score. His 29-yard touchdown to Ronnie Blackmon with 12 seconds left put the Wolves in front 46-39.

West Georgia scored another touchdown on the final play of the game by returning a fumbled lateral.
Frost wound up completing 41 of 65 passes for 503 yards and four touchdowns. He also scored a rushing TD.

Blackmon caught 10 passes for 114 yards and one touchdown.

Bry Webb led the West Alabama (5-5, 3-4) rushing attack with 114 yards on 18 carries. Quarterback Tucker Melton ran for a pair of scores and passed for another, compiling 54 yards on the ground. He completed 4 of 10 passes for 57 yards and a TD.

Cole Fagan finished with 10 rushes for 53 rushing yards and one rushing touchdown for Mississippi College. Marcus Williams had nine rushes for 51 yards, and quarterback John Henry White ran 15 times for 48 yards and a touchdown.

Belhaven reached eight wins in a season for the first time in school history.

Kolbe Blunt ran for 66 yards and a touchdown for the Blazers. His 15th rushing touchdown of the season tied him with Bradley Foley for Belhaven’s career record of 25.

Millsaps did not score until Benny Malin threw a 32-yard touchdown pass to Xavion Butler with 9:56 left in the fourth quarter, making the score 46-7.