Sports column: Taking a look at the MHSAA’s next alignment plan 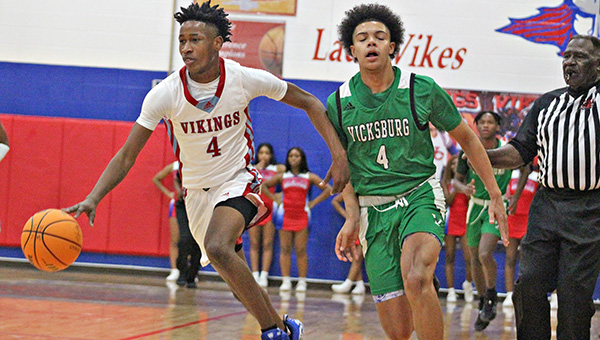 Warren Central's Taylor Mitchell, left, dribbles along the sideline as he's fouled by Vicksburg's Kealon Bass during a boys basketball game in 2021. Warren Central and Vicksburg will be placed in the same region in the MHSAA's next reclassification cycle that begins in the 2023-24 school year. (Ernest Bowker/The Vicksburg Post)

One of the oddities of the sports world is that fans love to think about future seasons as much as the current one. It’s what makes things like the NFL’s schedule release day — or, closer to home, the Mississippi High School Activities Association’s reclassification announcement — a big event.

The MHSAA’s most recent split shook up the association’s alignment in more ways than one. It seems worthwhile to do a deeper dive into some of the numbers, and what they mean for Warren Central and Vicksburg High.

• For the first time since 2009, the MHSAA added a classification. The last one added Class 6A but kept the same structure as the previous alignment, with the 32 largest schools in the top classification and the next 32 in 5A.

This time, only 24 schools are in each of Classes 7A, 6A and 5A. It is designed to increase competitive balance between schools at the far ends of each class.

•  With 24 instead of 32 teams in each classification, the size of each region is also changing from eight teams for football and four for other sports, to six in every sport.

For football, it will make the region schedule more of a sprint with only five games rather than seven. It will, however, create opportunities for some attractive non-region games.

Warren Central, for example, might be able to rekindle football series with longtime rivals Clinton and Madison Central that went away in the 2021-23 realignment.

Other sports will have expanded region schedules, with 10 games instead of the current six. It could cut down on travel, but will limit the opportunities to play some marquee matchups.

• Speaking of the “other” sports, the new Region 2-6A that Warren Central and Vicksburg were placed in might be one of the best all-sport regions in Class 6A.

Both Warren County schools hold their own in baseball, softball and basketball, but will have to deal with several state powers.

Neshoba Central is a softball dynasty in the current Class 5A, as well as a perennial girls basketball state championship contender. Callaway is always dangerous in boys basketball, and Columbus isn’t far removed from a couple of state championships. Ridgeland is a bit of a mirror image of Warren Central and Vicksburg — solid, if not dominant, in most sports.

It adds up to a balanced league that should be fun to watch all year long.

• Interestingly, four of the smallest seven schools in Class 5A — Vicksburg, Neshoba Central, Columbus and Callaway — wound up in Region 2-6A. This is mostly a function of geography.
Region 1-6A includes six North Mississippi schools, and 4-6A is a cluster of schools along the coast. That left 2-6A and 3-6A to divvy up everything in between.

Vicksburg, Warren Central, Ridgeland and Callaway are natural geographic fits for 2-6A and in fact have been in regions together before. Columbus and Neshoba Central, however, are geographical orphans with no neighbors. They can’t be squeezed into Region 1-6A and it makes no sense to send them south. Thus, they wound up making Region 2-6A the Land of Misfit Toys.

• For the first time in 10 years Warren Central and Vicksburg are in the same classification and region, but don’t get used to it.

While Warren Central appears entrenched in Class 6A for the foreseeable future — it was 55 students below the cut line between 6A and 7A — Vicksburg could easily move down to Class 5A when the MHSAA realigns again in 2024.

Starting with this cycle the MHSAA bases its classifications on enrollment numbers of students in grades 9-11. Vicksburg had 699 students in those grades, making it the smallest Class 6A school. Greenville was the largest Class 5A with 690.

Jim Hill (712), Columbus (706), Callaway (705) and Gautier (683) were also on the border between 5A and 6A. Even slight shifts among those schools’ populations over the next two years could send any of them up or down a class. Any new schools that open could also alter the landscape.

Warren Central and Vicksburg will always play each other in everything. It’s just that their reunion as region rivals could be temporary, so enjoy it while it lasts.