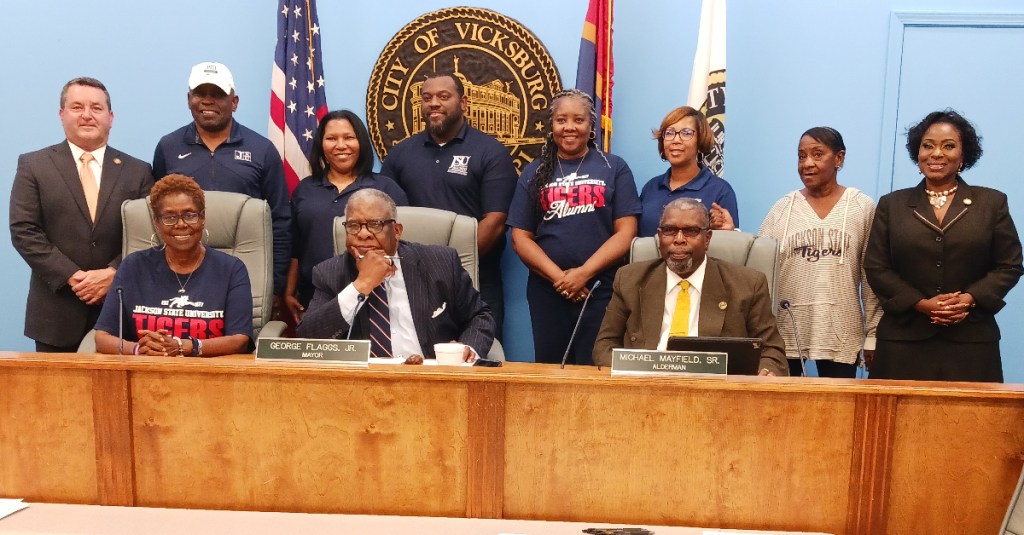 The Board of Mayor and Aldermen sit for a photo with Vicksburg Jackson State alumni after passing a resolution supporting a football stadium on the Jackson State campus. (Photo by John Surratt | The Vicksburg Post)

The Vicksburg Board of Mayor and Aldermen put its support behind the efforts of Jackson State University to get a football stadium on the Jackson State campus through a resolution passed during Monday’s regular meeting.

“The local alumni chapter came and asked us to support it, so we wanted to be on record supporting having a stadium on campus and at the same time call on the Legislature to assist — not necessarily to pay for the stadium, but to help assist us funding it and building the stadium,” Mayor George Flaggs Jr., a Jackson State Alumnus, said after the meeting.

A former state representative, Flaggs said based on his experience in the Legislature, “there are ways that we can do to structure debt to get to where we need to get.”

Every university, he said, needs its own footprint and a stadium. He said JSU is the only university in Mississippi without a football stadium, adding a stadium is a good recruiting tool for each campus. The school’s location in relation to Mississippi Veterans Memorial Stadium where it plays its home games, he said, “Is a disadvantage to transport those students every game to that stadium,” Flaggs said.

According to the university, he said, it costs JSU $30,000 per home game to transport the team, band and students.

“I just want to be on record — one, to support the alumni and two, to make certain that we encourage our leaders to look at it in a serious way,” he said.

Flaggs said the economic advantage for Vicksburg is that JSU is within a 50-mile radius of the city “and we can benefit from it, too, if we create the economic impact and create a partnership between Jackson State and Vicksburg as we do with Alcorn.

“I just believe we can sell Vicksburg in a 50-mile radius,” he added.

In comments before the resolution, Flaggs discussed the economic impact of Alcorn State University on Vicksburg during football season, saying it has a big economic impact through hotel room rentals and meals.

Using Alcorn’s stadium as an example, he said, “when school plays on its turf and soil it’s a moral advantage. There is no way you can recruit at any school in this country unless you have a stadium on the campus.”

The Jackson State alumni, Flaggs said, is not asking the Legislature to build a stadium, “We’re asking them to assist in the building and the structure of the debt.

“This is more than about Jackson State — it’s about where we leave our mark,” Flaggs said. “We’ve got to look at things differently than we have in the past; taxpayer dollars generate revenue. You’ve got to spend money to make money.”