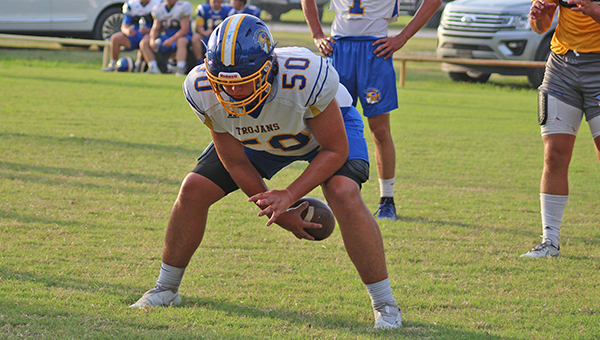 A month ago, Tallulah Academy easily defeated Newton Academy by 30 points. It won’t mean much, though, if the Trojans can’t do it again.

“That was their only loss. It scares me,” Tallulah coach Bart Wood said of having to play Newton again. “They’re a good team. They’re good everywhere. They remind me a lot of us. They don’t have one star player. They don’t have a weakness. The only advantage we have on them is we have a little more depth.”

Tallulah’s first encounter with Newton came in the middle of a five-game winning streak in which the Trojans won every game by at least three touchdowns. They had a bye in the first round of the playoffs, then beat Prentiss Christian 44-16 in the second round last week.

Although Tallulah wound up winning easily, its path to a blowout was a bit rocky. Prentiss Christian tied the game 16-all in the third quarter before Tallulah ripped off 28 unanswered points.

Quarterback Dee Morgan finished with 143 rushing yards and a touchdown, returned a fumble for a touchdown, and accounted for three two-point conversions.

“It was our offense that was out of sync. We were missing assignments. It was weird,” Wood said. “Defensively we held them to three first downs. We were not clicking on offense. It was simple stuff that we had not done all year.”

Newton survived a scare from Christian Collegiate Academy last week to win 40-34, and is trying to reach its first state championship game since winning the Class A title in 2014.

The Generals ran roughshod over every nearly opponent except Tallulah and Christian Collegiate — they beat the latter by a combined 10 points in two meetings — and would surely like to avenge their one loss this season.

Wood, though, said revenge is probably well down the list of goals for both teams. A coveted trip to Jackson for the state championship game awaits the winner. It would be Tallulah’s sixth appearance in the championship game in nine years, as well as a chance for 10 seniors to go out on top.

That, Wood said, is all the motivation either team needs.

“You’re playing for a trip to the state championship. If that don’t get you ready, I don’t know what will,” Wood said. “I hope I don’t have to do too much to get them ready to play.”