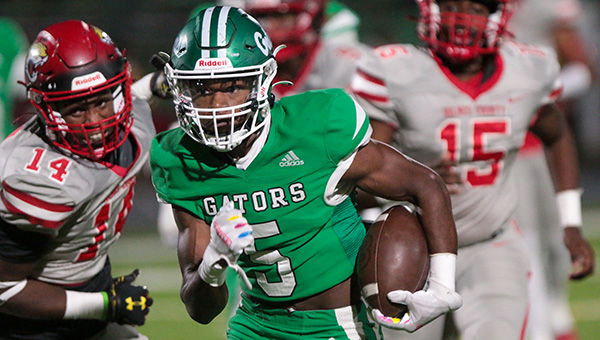 Vicksburg High running back Johnny Smith (5) carries the football last week against Holmes County Central. Smith and the Gators will host Cleveland Central Friday at 7 p.m., in the first round of the MHSAA Class 5A playoffs. (Walter Frazier/For The Vicksburg Post)

Vicksburg High’s 2021 football season didn’t have the ending it dreamed of, but it might have been the one it needed.

The Gators got in and got their feet wet with a first-round victory before bowing out in the second round. Head coach Todd McDaniel said it was a necessary learning experience for a young team.

“The process is needed. I don’t care what it is, whether it’s getting a job or building a football program or building a corporation. You’re going to have trial and error, and without that process you don’t have the knowledge to continue to grow,” McDaniel said. “Our kids had the opportunity to get into the playoffs and … understand what it was all about. This is not John Madden where you can go in and get a rating and that’s what it is. You have to have the opportunity to grow and learn from your experiences.”

The Gators learned well, and grew into a formidable team that no longer has modest postseason goals and won’t be happy just to say they were there.

Vicksburg (8-2) is the MHSAA Region 2-5A champion and has won eight games in a row. It could have home field advantage throughout the playoffs, and a trip to the Class 5A championship game is more than just wishful thinking.
The road to Hattiesburg starts Friday night at 7, in The Swamp, with a first-round playoff game against Cleveland Central (5-6).

“We’ve got three seasons — non-conference, conference and playoffs. We’re right here where we want to be in the playoffs,” McDaniel said. “We wanted the No. 1 seed and we have that. Our job now is to go out there and play one at a time. It’s a one-game season, so let’s go 1-0. The regular season doesn’t even matter any more. Let’s go 1-0 on Friday night.”

Friday’s game is a rematch from last year’s first round. Vicksburg won that one, 25-3, for its first postseason victory since 2008.

The Gators are favored again, but this version of Cleveland Central is a bit different than last year’s model. Where the Wolves liked to run the football in 2021, they’re throwing it in 2022.

Quarterback Javaris Beamon has passed for 1,880 yards and 17 touchdowns, with only four interceptions in 250 attempts. Four receivers have at least 249 yards apiece.

“They have some guys on the perimeter that can stretch the field and make plays. They run a lot of slip screens and things of that nature to get their athletes the football out on the perimeter,” McDaniel said. “We have to make sure we come up and tackle and everybody rallies to the football. We can’t let them get that little seam, because if they get it they’re gone.”

The Gators, of course, have defended as well as anyone in Class 5A this season. They’ve allowed 9.3 points per game, which is the best in Class 5A, and held seven of 10 opponents to 10 points or less.

Cleveland Central’s offense has run hot and cold, but has scored 32 and 42 points in back-to-back victories the past two weeks as it played its way into the postseason.

Cleveland Central isn’t the only team that’s changed, McDaniel added. His Gators have gotten better as the season has gone along. An eight-game winning streak has given them plenty of confidence and swagger that might have been missing heading into last year’s playoffs.

It’s just another lesson learned about what it takes to reach the next level.

“My entire offense (in 2021) was sophomores with a few seniors sprinkled in. My defense was juniors at that time and they’d never experienced that,” McDaniel said. “Now I think we’ve had the opportunity to go in and learn what it takes to get to a state championship because that’s what this tournament is all about.”