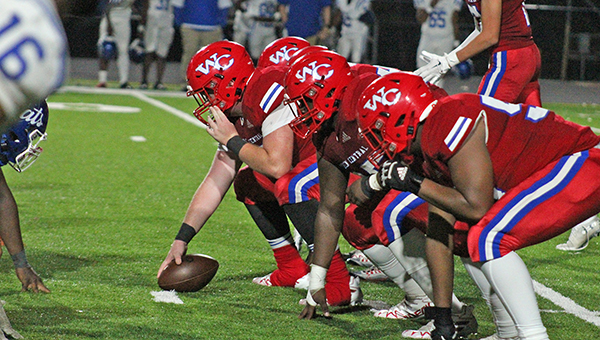 Warren Central's offensive line prepares to run a play against last week vs. Meridian. Warren Central will play at Gulfport Friday at 7 p.m. in the first round of the MHSAA Class 6A playoffs. (Ernest Bowker/The Vicksburg Post)

The South half of the MHSAA Class 6A football playoff bracket is a tough neighborhood.

Five of the eight teams have at least nine victories this season, and four of the six combined losses among them have been within the same group.

On top of it, at least one of those teams will have an outstanding season end Friday night. Warren Central (9-1) heads to Gulfport (9-2) for round one in a clash of great teams that only one can survive.

“It’s very good football teams. Really good environments for high school football. It’s fun to be a part of it. But we can’t get caught up in the big picture of it all,” Warren Central coach Josh Morgan said. “Any one of us could get beat, and anybody can beat anybody. Nobody’s setting their brackets yet. That’s an exciting part of it. It’s about who gets hot and who’s able to survive and advance.”

The 2022 Warren Central Vikings know as well as anyone how difficult and cruel this part of the Mississippi high school football world can be. Their only loss was to Brandon in September, and it dropped them all the way to the No. 3 seed from Region 3-6A because of tiebreakers in the league.

Gulfport, though, can empathize. Its two losses were to Picayune and Ocean Springs, who are both undefeated. The latter defeat, two weeks ago, left the Admirals as the No. 2 seed from Region 4-6A.

“Their two losses have come to Picayune, who is No. 1 in 5A, and Ocean Springs who is No. 1 or 2 in 6A,” Morgan said. “They’re a very good football team in all three phases, with good players. They’ve got a veteran quarterback who makes them go and a lot of playmakers. It’s not your typical round one of the playoffs.”

Being the No. 2 seed gave Gulfport home field advantage for the first round. Warren Central will have to travel nearly four hours to the Coast, but has shown over the years that it is rarely fazed by going on the road for the playoffs.

“We feel like, right now, the only advantage that they have is we have to travel. So we want to make that travel where it’s a plus for us. We want to be very comfortable and organized in it. We try to use that as a plus for us,” Morgan said.

A bigger concern for the Vikings might be shaking off what was arguably their worst performance of the season. They beat Meridian 24-12 in last week’s regular-season finale, but it was a mistake-filled game. The Vikings dropped a sure touchdown pass, had a drive inside the 30-yard line blown up by penalties, and committed two turnovers.

Meridian never got closer than two scores in the second half, but scored two touchdowns in the fourth quarter that made things far more uncomfortable than they needed to be.

Morgan said a combination of distractions such as senior night and the playoff situation — Warren Central could have won the Region 3-6A championship, but didn’t control its path to it — led to a rare mental off night for a program that prides itself on avoiding that sort of thing.

“I think it was the accumulation of several different things. We had our second-best offensive output of the year. It shows you how important penalties and turnovers are,” Morgan said. “When you look at it, it was kind of a perfect storm of a lot of things and we didn’t play like we wanted to play. But it was stuff that we can easily fix.”

Now that the playoffs are here, Morgan added, it’s time for the Vikings to lock back in. This is likely just the first of three difficult games on the road to the state championship game in Hattiesburg on Dec. 2.

The Warren Central-Gulfport winner gets either Brandon (9-1) or Hancock (6-5) next week. After that, a potential showdown with Ocean Springs (10-0) or Oak Grove (9-2) awaits in the South State championship game.

“We have to understand the urgency of the playoffs. This is the point in time where we must up our game and be at our best. We have to make sure we have no regrets that we did everything possible we could in preparation, practice and film study,” Morgan said. “We’re going to work with a focus that’s different from your other seasons. You’re literally in a one-game season. I think that approach has always been good.

“I expect our guys to have a bounce in their step and a look in their eyes, because that’s what time it is. It either brings the best out of your or it don’t.”