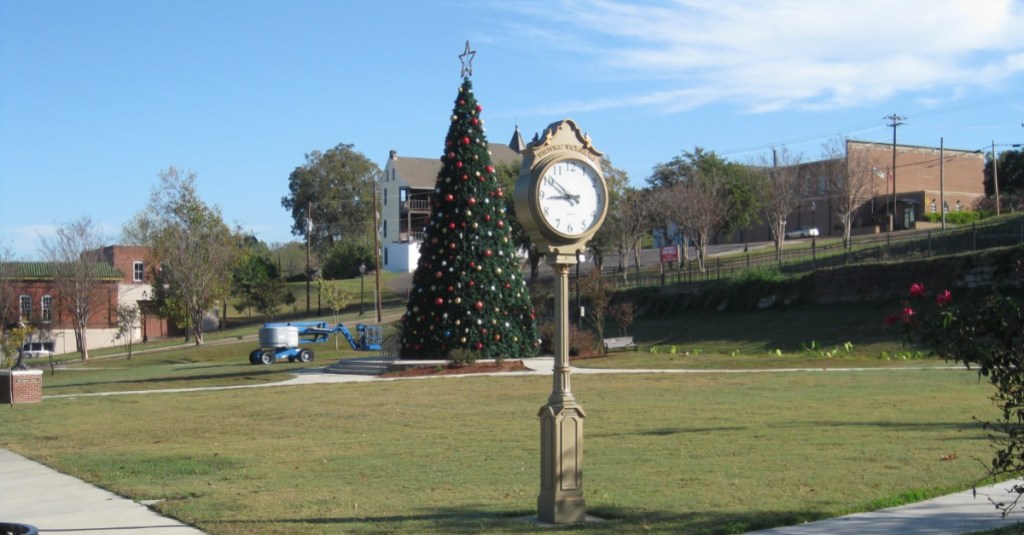 A Christmas tree sits on the stage at Washington Street Park. The Board of Mayor and Aldermen Thursday approved advertising for bids to make improvements at the park. John Surratt/The Vicksburg Post

Washington Street Park, which in 2021 was considered a site for condominium development, is getting improvements — including a possible Jumbotron screen — to make it more attractive for events.

The Vicksburg Board of Mayor and Aldermen on Thursday authorized City Clerk Walter Osborne to advertise for bids for the project. City officials expect to open bids on Dec. 19, according to the advertisement for bids.

“That’s a part of the downtown redevelopment (program),” Flaggs said.

Community Development Director Jeff Richardson said the improvements include upgrading the park’s electrical system, installing a top over the park’s stage and extra lighting by benches in the rear of the park and along the sidewalk facing Washington Street. He said the installation of a Jumbotron screen would depend on whether the city has enough money in the project’s budget.

Developed in 2019 at a cost of $146,538, Washington Street Park is a multi-use park at the corner of Jackson and Washington streets that serves as the site for the Vicksburg Farmers Market, Christmas in the Park and other events.

In 2021, Ridgeland developer MidSouth Companies LLC saw the park and property on Mulberry Street near the Vicksburg Convention Center as potential sites for condominium developments.

The board in February 2021 approved a resolution declaring the Washington Street Park property and the property adjacent to the Vicksburg Convention Center as surplus property and set a closing date of 30 to 45 days later.

After seeking several extensions, MidSouth dropped the projects in January.