Alabama comes from behind to beat Ole Miss 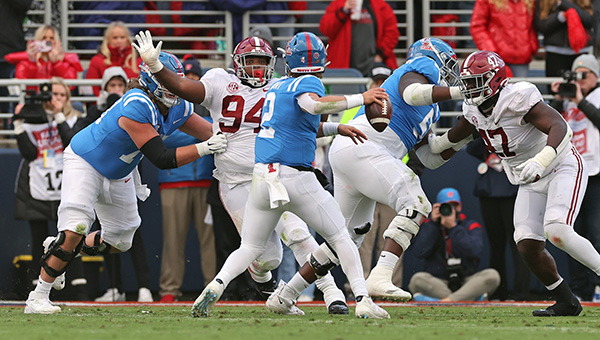 OXFORD (AP) — Alabama coach Nick Saban wondered which Crimson Tide team would show up in Mississippi. As it turned out, he didn’t need to be worried, especially about quarterback Bryce Young.

“They have a lot of pride in what the standard of playing (at) Alabama is,” Saban said. “They were challenged to play to that standard, to take it personally, to understand they’re responsible for the identity that they create by how they play on the field.”

Will Reichard kicked field goals of 23 and 49 yards in the fourth quarter to snap a 24-all tie. Alabama (8-2, 5-2 Southeastern Conference) secured the win by forcing an incomplete pass into the Crimson Tide end zone in the final minute to extend its seven-game winning streak over the Rebels.

Alabama’s victory also handed the SEC West championship to LSU. LSU beat Arkansas 13-10 earlier in the day. It could still end up tied with Alabama and Ole Miss, but owns the head-to-head tiebreaker over both and thus earned the trip to Atlanta to face Georgia in the SEC championship game.

“It was a tough night in a lot of ways, but it was a great night for us because I think we took a step in the right direction,” Saban said. “We didn’t get off to a great start, but the players just kept making one play at a time and at the end of the game that we needed to make.”

Young finished 21-of-33 for 209 yards, including touchdown throws to Jermaine Burton, Cameron Latu and Ja’Courey Brooks.

Alabama trailed 10-0 early and 17-14 at halftime. The Crimson Tide made efficient use of 317 yards of total offense and a defense that stopped three Ole Miss opportunities in the final quarter.

Alabama was 4-for-4 in the red zone and had the edge in the kicking game with Reichard and punter James Burnip, who had a 44-yard average on four kicks.

“Making it 17-14 at halftime was good,” said Saban, regarding a Crimson Tide touchdown with eight seconds before halftime, setting off a 20-0 spurt that spanned the middle quarters. “No one even talked about the score at halftime, which is how we wanted it to be.”

Judkins highlighted the game’s final drive with runs of 35 and 13 yards to get the Rebels to the Alabama 14-yard line before the Crimson Tide got the game-clinching stop.

Jaxson Dart was 18 of 31 passing for 212 yards with a 3-yard touchdown pass to Jonathan Mingo. The Rebels finished with 403 yards of total offense, but finished 0-for-3 on fourth down conversions, including both of the final two offensive series.

On their final drive, the Rebels got the ball to the Alabama 14-yard line with just over a minute to go. Dart threw incomplete on first down, was sacked on the next two plays, and then threw another incompletion into the end zone on fourth down.

“It’s a shame. We had the ball in our hands at the end of the game and the crowd was in it, but we didn’t get it done,” Ole Miss coach Lane Kiffin said. “They’ve got great players and great coaches, too, but it’s just a shame.”