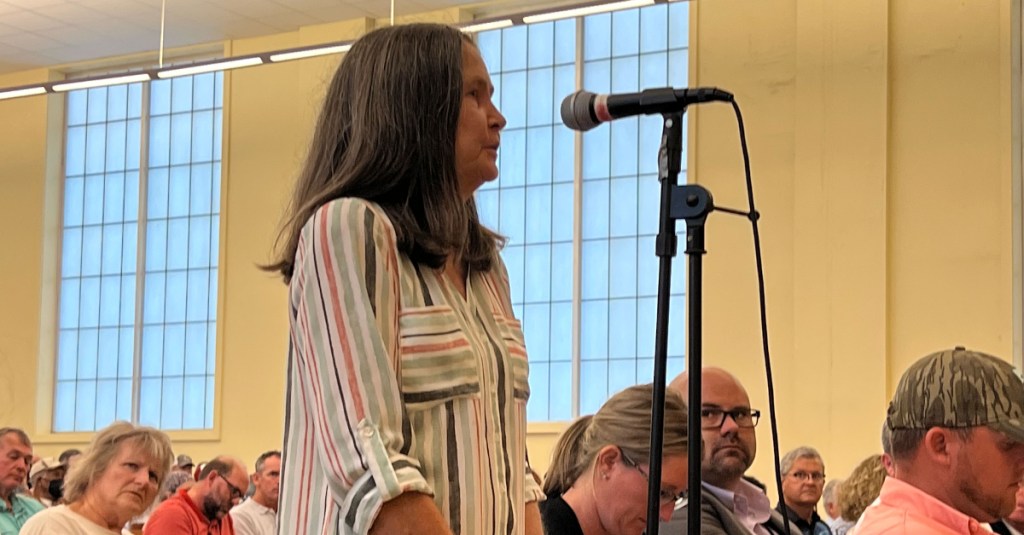 Those who’ve driven U.S. 61 through the northern end of Warren County and into the South Mississippi Delta over the last four years have likely seen signage that reads, “FINISH THE PUMPS.”

In some spots, it’s spray-painted on old propane tanks. In one place, it’s spelled out in 8-foot-tall letters on the side of a grain silo. And one would have to be blind to miss the giant bull statue near Onward that reads, “NO MORE BULL. FINISH THE PUMPS” in all-capital letters.

But fewer people know the face behind the blog that originated the slogan: Eagle Lake resident Ann Dahl.

Dahl, who lived in the Vicksburg area for 50 years before retiring to Eagle Lake in late 2018, said the idea for finishthepumps.com was borne out of her own desire to educate others about the facts surrounding chronic floods in the South Mississippi Delta and the “political minefield” that is the Yazoo Backwater Pumps project.

“I’m a newcomer to the floods; 2019 was my first one,” Dahl said. “Although I had been in this area for 50 years, I had never even heard of the term ‘backwater flooding’ at the time I bought my house. All the previous floods, all the history of it, I was completely clueless about even though I lived right here in the area.”

Dahl, who retired from the Grand Gulf Nuclear Station in 2018, said she was fully prepared to have her “dream home” on the lake, but the 2019 Yazoo Backwater Flood had other plans.

“The 2019 flood was completely unprecedented,” she said. “It had never happened before, where Highway 465 from the Backwater Levee to the lake had never flooded and closed before.”

Dahl was one of the lucky ones. Her house sits on top of the Brunswick Circle Levee, an earthen structure constructed by Irish immigrants in the late 1800s to protect farmland and now protects approximately 200 homes.

Because of its location on the high ground, the home did not flood, but Dahl said her lakeside property saw more than $40,000 of damage to the grounds, pier and outbuildings.

“When the floods of 2019 finally overtook and equalized with Eagle Lake itself and rose about 12 feet within a 36-hour period, it was pretty intimidating, because it was not like the slow rise over the time period for 2019,” she said. “I did not get water in my home, but I have a lot of damage that’s not covered by insurance because it’s not your home, it’s your outside property. All of that has been out-of-pocket repairs.”

Some things, like the boathouse and the pier, she hasn’t bothered repairing. The $40,000 she’s invested into the property has gone almost exclusively to stabilizing the bank and her yard. And frankly, she said, she’s not putting more money into the property until the Yazoo Backwater Pumps are completed.

But experiencing the flood, and sitting through her first community emergency meeting, motivated Dahl to do something about it.

On Jan. 26, 2019, area officials held a community meeting there at the lake. Warren County Sheriff Martin Pace, Warren County Emergency Management Coordinator John Elfer, representatives for the Vicksburg District, Mississippi Levee Board Engineer Peter Nimrod and representatives with the Mississippi Department of Wildlife, Fisheries and Parks were all in attendance.

“They were all trying to warn us that this could be a bad year, and in the back of the audience, I kept hearing people rumbling, ‘Yeah, it’s because we didn’t get the pumps,'” Dahl said. “And I thought, ‘What pumps are they talking about?’

“So I literally went home and I started researching for myself, and I kind of went down a rabbit hole for almost six weeks,” she added. “I really read everything I could get my hands on. I looked at old newspaper articles, opinion pieces by environmentalists, a lot of extensive reading on the reformulation study by the Corps of Engineers, and I looked at both sides, to really inform myself.”

During these six weeks while she had her “head in the computer,” Dahl found herself in a race against time — and against the floodwaters. By the time the six-week period was over and she’d formulated her own educated opinion, Eagle Lake was under a mandatory evacuation order.

For her, it was an epiphany.

“I’m reading all these things online, but I’m also seeing it with my own eyes,” she said. “By the end of that six weeks, I’m mad. I realized a lot of the things from the 2008 veto, a lot of the positions the environmentalists hold, they don’t pass the common sense test.”

When Dahl speaks about environmentalists, she is referring to groups like American Rivers, the Audubon Society, the Sierra Club and the National Wildlife Federation.

She continued to research and is still researching years after the flood receded.

Her opinion, she said, is: “This is a real injustice that has been done, and it has to be rectified.”

From here, Dahl and her cohorts, a combination of farmers, lakeside residents and laborers, began the grassroots Finish the Pumps movement. One thing she wants to make clear to readers on her blog is that she’s not an expert — she’s merely a resident with a desire to be informed about the issue.

That desire has led her to publish dozens of research-based blog posts on the site, with all her sources cited and listed for readers. Each post is an effort to “dissect” the points made by groups opposing the pumps.

“We all just came to the same conclusion that this is wrong, this has to be corrected, and that if nobody else is going to speak up and say anything, we’re going to,” she said. “I can’t even tell you who came up with the ‘Finish the Pumps’ slogan, but it’s priceless. … Finish what you started. And bless the person who came up with (the slogan).”

They’ve taken their mission beyond the screen as well, going to trade shows and events and distributing literature. And until the pumps are finished, she said, nothing — not even the 2021 veto of the project — is going to stop them.

“There have been a lot of ups and downs for us,” she said. “We thought we were almost there. It had been approved. But we knew when the (Presidential) administration changed it was going to be an uphill battle.

“But that’s not the end of our story. Until those pumps do get built, we will continue to flood, and it will continue to affect the economy and the people of this area. … We will not rest until it’s corrected. We will choose our battles, but we will always be there to respond.”