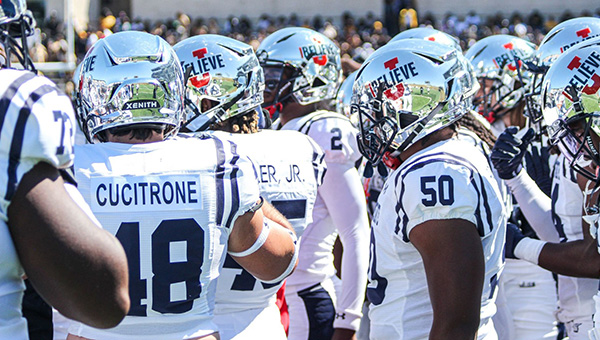 MOBILE, Ala. — The SWAC Championship Game is coming back to Jackson.

Shedeur Sanders had four touchdown passes and undefeated Jackson State beat Alabama A&M 27-13 on Saturday at the Gulf Coast Challenge to earn the Southwestern Athletic Conference Eastern Division championship for the second season in a row.

Jackson State (10-0, 7-0 SWAC) will host the SWAC Championship Game on Dec. 3 at Veterans Memorial Stadium. It finishes the regular season next weekend at Alcorn State.

Travis Hunter gave the Tigers their first touchdown after taking a pitch-pass from Sanders and going around the right end for a 20-yard score. Sanders added a 21-yard touchdown pass to Willie Gaines in the third quarter.

Hunter also had an interception on defense.

Alcorn committed four turnovers, but turned the tables with one of its own. Wildcats quarterback Jalon Jones threw a pass towards the sideline that was picked off by Smith and returned 50 yards for the go-ahead score with 4:39 remaining.
Alcorn forced five turnovers in all.

On offense, Jarveon Howard led the Braves with 129 rushing yards and a touchdown. Quarterback Tre Lawrence was 5-of-13 passing for just 35 yards, and was sacked four times.

Jones was 22-of-34 for 228 yards and a touchdown for Bethune-Cookman, and also scored a rushing touchdown.
Alcorn won its second game in a row following a three-game losing streak. It will finish the season on Nov. 19, at home against Jackson State at 2 p.m. The game will be streamed on ESPN+.

McDaniel was one of three quarterbacks, along with Besean McCray and Harold Blood, that Southern used. They combined to go 15-of-22 for 240 yards and three TDs. The Jaguars built a 27-0 lead early in the third quarter.

Jakobe Thomas ran for 77 yards and scored Valley’s only touchdown on a 5-yard run midway through the third quarter.

Delta St. 17, West Alabama 7
Kelvin Smith caught a touchdown pass and ran for another score as Delta State grinded out a win over West Alabama (5-6, 3-5 Gulf South Conference) in its regular-season finale Saturday.

Smith caught a 24-yard TD pass from Patrick Shegog in the first quarter, and then ran for a 3-yard score in the third. Smith finished with 66 total yards — 30 rushing and 36 receiving — on an underwhelming offensive day for Delta State (10-1, 7-1).

Jarrett completed 9 of 11 passes for 246 yards and four touchdowns, while running for 26 yards and a pair of short touchdowns. Jarrett’s 43-yard touchdown pass to Caden Leggett with 5:38 left in the second quarter put the Argos ahead 28-7, and Mississippi College never got closer than two touchdowns again.

The Choctaws finished the season on a four-game losing streak.

Rollins was 27-of-41 passing for 373 yards and three touchdowns. Russell caught five passes for 86 yards and two TDs, and Kevon Samuels had 11 receptions for 181 yards and one score.

Kolbe Blunt ran for 140 yards and two touchdowns for Belhaven, which set a program record with eight wins this season.

Centre College 57, Millsaps 3
Centre College (6-4, 4-3 Southern Athletic Association) scored on an interception return, kickoff return and safety while piling up 43 points in the first half, and ended a dismal season for Millsaps (3-7, 2-5) with a blowout.

Millsaps’ only points came on a 34-yard field goal by Ethan Klapatch with 5:04 left in the second quarter. Centre’s Greer Stone returned the ensuing kickoff 79 yards for a touchdown to make the score 36-3.

Millsaps lost its last five games of the season and was outscored 225-17 during the losing streak. It allowed 50 points or more in each of its last three games.