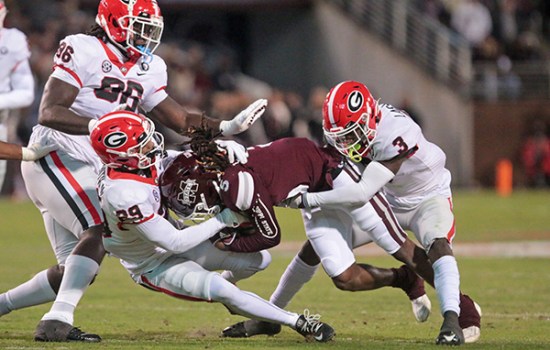 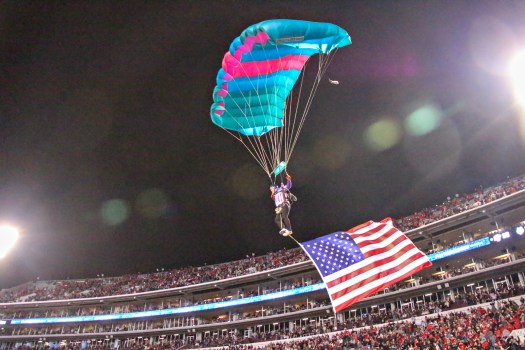 A parachutist drops into Davis Wade Stadium with the game ball and an American flag prior to kickoff of Saturday's football game between Mississippi State and No. 1 Georgia. (Walter Frazier/For The Vicksburg Post) 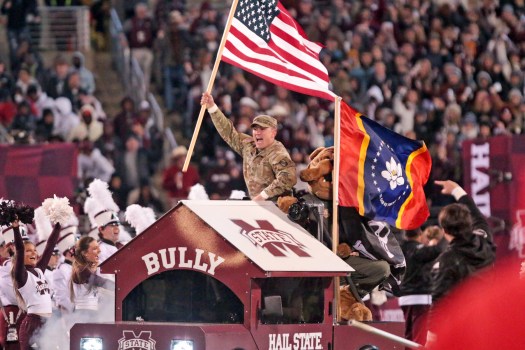 A soldier carries the American flag into Davis Wade Stadium before the start of Saturday's football game between Mississippi State and No. 1 Georgia. (Walter Frazier/For The Vicksburg Post) 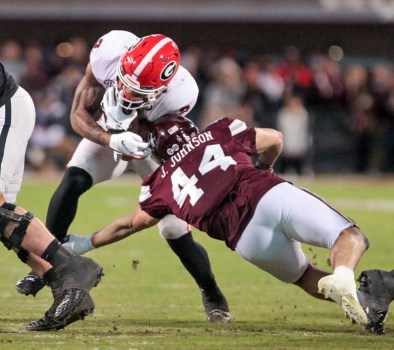 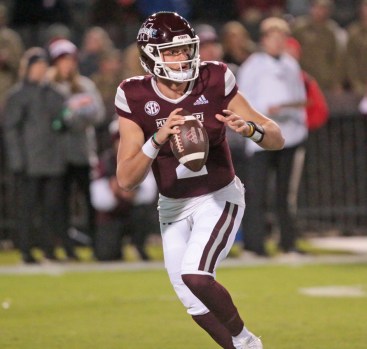 Mississippi State quarterback Will Rogers looks for a receiver during Saturday's game against Georgia. Rogers threw for 261 yards and a touchdown, but his Bulldogs lost to the visiting Bulldogs 45-19. (Walter Frazier/For The Vicksburg Post) 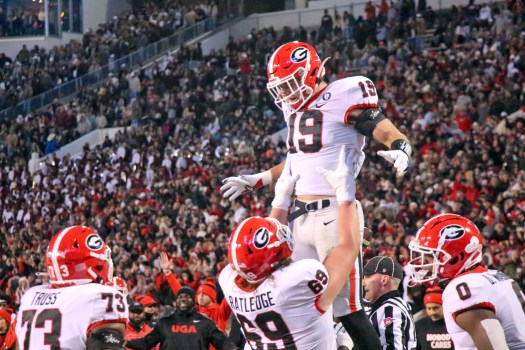 STARKVILLE (AP) — No. 1 Georgia is going to the SEC championship game.

“I’m really proud of our team. When you go on the road in the SEC in an environment like this at night, there’s tremendous adversity and our guys responded again and again,” Georgia coach Kirby Smart said. “Our guys kept responding and competing.”

With the victory, the East Division champion Bulldogs secured a spot in the SEC championship. They will take on LSU in Atlanta on Dec. 3.

“It was a team win and we made plays when we needed them,” Bennett said.

Mississippi State (6-4, 3-4) struggled to consistently produce against Georgia on the offensive side. Will Rogers went 29-for-51 for 263 yards and a touchdown. Mississippi State rushed for just 47 yards on 15 carries. Rufus Harvey led MSU with six catches for 66 yards and a score.

“They have all five-star players. They’re pretty good on defense and coach Smart does a really good job,” Rogers said. “They had a really good scheme for what we were doing and it’s hard to finish drives on a good team.”

Georgia turned the ball over twice on interceptions by Bennett and had another near turnover in the red zone in the first half when a fumble was nullified after the play was blown dead.

Georgia grabbed control with a big second half. Receiver Ladd McConkey had a 70-yard touchdown run in the opening minute of the third quarter and a 17-yard TD reception to help Georgia open a 31-12 lead.

Mississippi State lost for the third time in four games. It will host East Tennessee State next weekend, and then finish the regular season at Ole Miss on Thanksgiving night.

“I thought early on we did some good things. There was kind of a feel-out process to see what we were capable of doing,” MSU coach Mike Leach said. “I thought we left two obvious scores out there which would not be too tough to have. We did more good things than bad, but I thought that we could have finished drives better.”