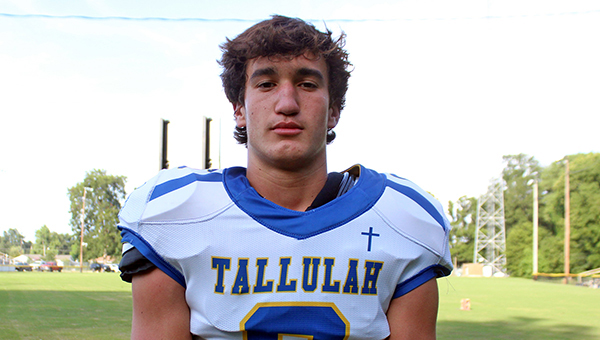 Tallulah Academy's Henry Ellerbee caught a 70-yard touchdown pass in a 52-30 victory over Newton County Academy in the MAIS Class 2A semifinals on Friday.

TALLULAH — Tallulah Academy had home field advantage throughout the MAIS Class 2A football playoffs. It’ll finally have to leave, but is just heading to its home away from home in Jackson.

Henry Ellerbee turned a short pass into a 70-yard touchdown for the first of 30 straight points for Tallulah, and the Trojans beat Newton County Academy 52-30 in the MAIS Class 2A semifinals on Friday.

The Trojans will play Tunica Academy on Nov. 17 at 3 p.m. at Jackson Academy. Tunica beat North Sunflower Academy 64-44 in the other Class 2A semifinal on Friday.

“We felt good about this year. We had all the pieces. It’s come together. The boys have come together,” Tallulah coach Bart Wood said.

Tallulah and Newton matched each other point for point in the first half, and went into halftime tied at 22. In the third quarter, Ellerbee caught a short hitch pass and turned it up the sideline for his long touchdown, and the start of a Tallulah avalanche.

The Trojans recovered the ensuing onside kick and scored again, then got a defensive stop and added a third touchdown early in the fourth quarter to make it 44-22. They added a third TD before Newton (10-2) finally broke the string late with a 5-yard rushing touchdown by Micah Garrison.

Paxton Russell threw a touchdown pass and ran for a TD in the first half for Newton. The Generals’ only two losses this season both came at the hands of Tallulah Academy.

“They were kind of stopping us on offense, but we scored every time we got the ball but once,” Wood said. “Defensively, we just weren’t executing and it was crazy to me with how good we’d been playing defense. Then the second half we came out and played great defense.”