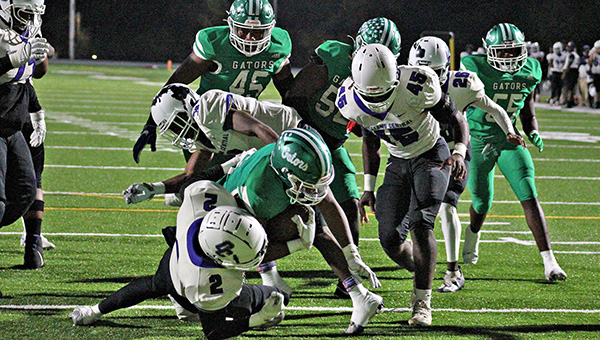 Vicksburg High running back Malik Montgomery scores on a two-point conversion in the second quarter of Friday's 36-14 victory over Cleveland Central in the first round of the MAIS Class 5A playoffs. Montgomery ran for 107 yards and two touchdowns in the game. (Ernest Bowker/The Vicksburg Post) 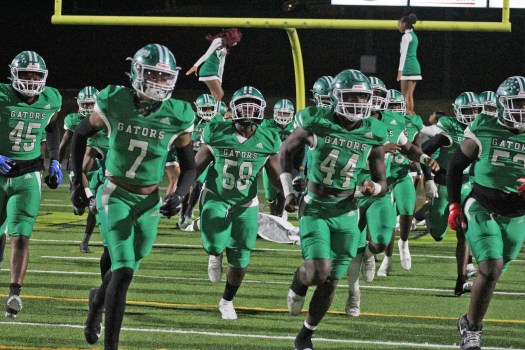 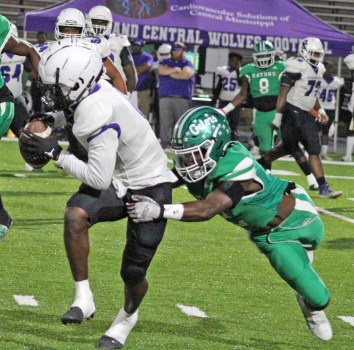 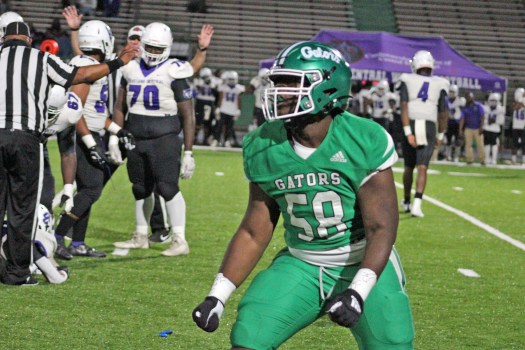 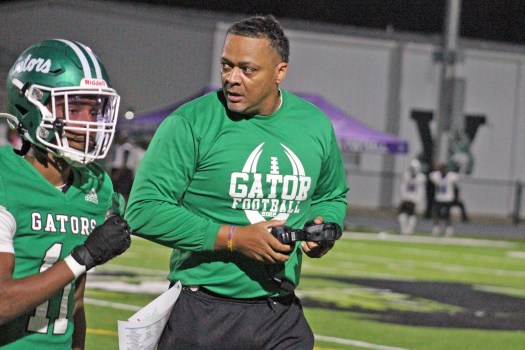 When they broke the postgame huddle, there wasn’t a lot of whooping and hollering from the Vicksburg Gators.

Some of it might have been that they just wanted to get out of the steady rain that had been falling for the past two hours. A lot of it, though, was that a dominant first-round playoff victory was expected and delivered.

The Gators had three running backs rush for more than 100 yards, and the defense held Cleveland Central to 67 total yards as they rolled to a 36-14 victory Friday night in the first round of the MHSAA Class 5A playoffs.

“I thought we played extremely well the first quarter and a half. We kind of got sloppy the second half with a good rain storm came through. I was just happy for us to come out the second half and put a few more points on the board, and the defense played lights out once again,” Vicksburg coach Todd McDaniel said. “We expected this, and we expected to go to the second round. Now it’s time to get prepared for Callaway.”

Vicksburg (9-2) won its ninth game in a row, and achieved another program milestone. It’s the first time since 1990-91 that it has won a playoff game in back-to-back seasons.

The reward for dispatching Cleveland Central (5-7) is a home game vs. Region 2-5A rival Callaway in round two. Callaway defeated Lafayette 20-14 in its first-round game Friday.

“It’s not a big deal right now. We know where we’re trying to get to,” McDaniel said of winning in the first round. “We’ll enjoy this tonight, but we’re going to get locked in on Callaway in the morning.”

Cleveland Central struck first, with a touchdown just 20 seconds into the game. Trevion Stokes returned the opening kickoff 55 yards to the Vicksburg 22-yard line, and on the first play from scrimmage Nick Taylor turned a short pass from Javaris Beamon into a touchdown and a 6-0 lead.

From then on, it was all Gators. They answered with a 41-yard touchdown run by DeCorey Knight on their first possession, added a two-point conversion run by Malik Montgomery to go up 8-6 with 8:32 left in the first quarter, and never trailed again.

Montgomery had two touchdown runs in the second quarter, from 3 and 60 yards, to put Vicksburg ahead 22-6. They stalled out a bit at that point when rain started falling and caused both teams to get sloppy. The Gators and Wolves combined for six fumbles in the last 2 1/2 quarters.

Getting a nice lead before having to deal with wet footballs was a key to victory, McDaniel said.

“It helped tremendously, because it got real sloppy,” McDaniel said. “We were able to put some things together in the fourth quarter and seal the deal, but I was just happy with the execution.”

The other two keys were an outstanding running game and a dominant defense, which have both been powering the Gators all season.

Knight, Montgomery and Johnny Smith all ran for more than 100 yards, and Vicksburg had 414 rushing yards as a team. It only threw one pass.

“The offensive line was blocking up front and executing, and the guys were hitting the seams and not turning the football over,” McDaniel said. “When that monsoon came through it was kind of hard to hold on to the football but we had to find a way to do it in any type of weather. But that’s what we want. We want to be able to grind it out.”

The defense, meanwhile, shut down Cleveland Central all night. The Wolves’ two touchdown drives totaled 28 yards, set up by the long kickoff return and a fumble at the 6-yard line.

Taylor scored both Cleveland Central touchdowns, on the 22-yard pass and a 1-yard run with 3:01 left in the game. Cleveland’s only two first downs in the second half came by way of pass interference penalties.

“(The defense) did an awesome job tonight. They’ve been doing it all year long,” McDaniel said. “Our main thing is to be able to get the same production out of the defense and offense next week. If we can do that, we’ll be right where we want to be.”