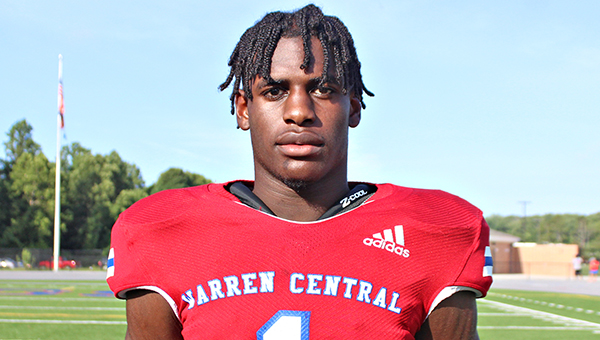 Warren Central running back Trey Hall scored two touchdowns in a 38-3 rout of Gulfport in the first round of the MHSAA Class 6A playoffs on Friday.

GULFPORT — When they rolled out of town Friday morning, Warren Central’s football players were sent off by a horde of well-wishers lining Highway 27 and even waving to them from the I-20 overpass in Bovina.

It was a heartwarming scene that inspired the Vikings so much, they might want to do it again next week.

Trey Hall ran for two touchdowns, and Warren Central’s defense forced four turnovers as it obliterated Gulfport 38-3 in the first round of the MHSAA Class 6A playoffs.

It was Warren Central’s largest postseason victory since a 56-0 rout of Ocean Springs in the first round in 1994.

“If you ask me if I’d have taken a 35-point win in the playoffs, I sure would have been proud to take it,” Warren Central head coach Josh Morgan said with a laugh. “We played our best game and were a focused football team that did everything just right. We were able to take over the game, and that came from being dialed in.”

Warren Central (10-1) reached the 10-win mark for the first time since 2016, and advanced to the second round for the third year in a row. It will travel to Brandon (10-1) next week to face the team that ended its season in 2021 and handed the Vikings their only loss this year.

Morgan wasn’t worried about the recent history with the Bulldogs.

“I’m not thinking twice about it. I’m so happy with these guys right now,” Morgan said. “Whoever is next, we’ll go play them.”

Warren Central improved to 6-0 on the road this season with an outstanding performance against a Gulfport (9-3) team that hadn’t lost at home.

Aidan Powell put the Admirals ahead 3-0 with a 29-yard field goal late in the first quarter, and then Warren Central scored 38 unanswered points from then on.

A long kickoff return by Eric Collins Jr. set up Hall’s 49-yard touchdown run with 1:28 left in the first quarter. Mark Gray had a 1-yard TD run and Jonah Artman a 23-yard field goal in the second quarter to put the Vikings ahead 17-3 at halftime.

Gulfport had a chance to cut into the lead in the final moments of the first half, but Trey Sanders intercepted a pass in the red zone to end the threat.

Warren Central then started the second half with a seven-minute scoring drive capped by Hall’s 1-yard run to make it 24-3 with 4:52 left in the third quarter.

“Those were two really big momentum swings,” Morgan said of the interception followed by the long touchdown drive.

Warren Central added another touchdown two minutes later, on a 2-yard run by Darius Carter, and a 20-yard TD run by Collins in the fourth quarter completed the blowout.

“We came out and threw an interception on our first drive. We didn’t start off great, by any means,” Morgan said. “We answered for the next 40 minutes. It was just non-stop. It just a dominating performance, and that’s the truth.”