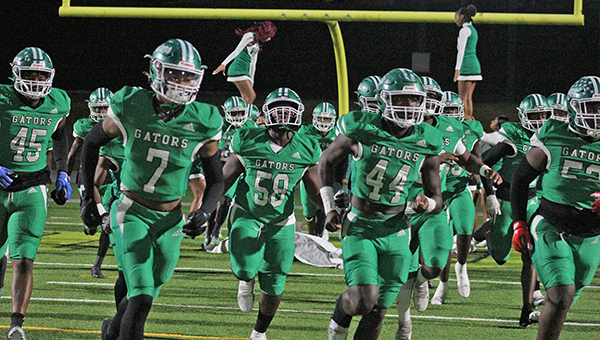 Vicksburg High football players run onto the field before the start of an MHSAA Class 5A playoff game against Cleveland Central. Vicksburg won 36-14, and advanced to face Callaway in the second round this Friday at 7 p.m. at Memorial Stadium. (Ernest Bowker/The Vicksburg Post) 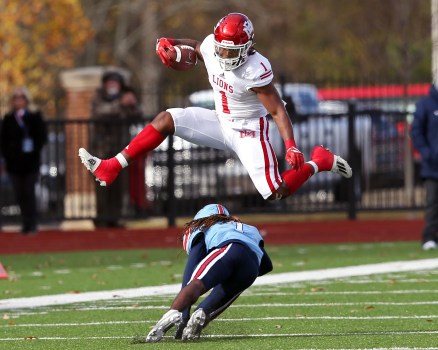 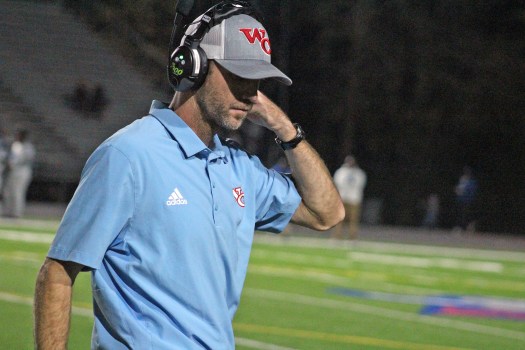 Warren Central football head coach Josh Morgan walks back to the sideline during a game earlier this season. Morgan led the Vikings to a 38-3 victory over Gulfport in the first round of the MHSAA Class 6A playoffs last week, for his 91st career win at Warren Central. The Vikings play at Brandon in the second round on Friday at 7 p.m. (Ernest Bowker/The Vicksburg Post)

1
Twenty seconds into Friday’s playoff game against Cleveland Central, the Vicksburg Gators found themselves in a place they hadn’t been in a while — behind on the scoreboard.

Cleveland Central returned the opening kickoff 55 yards to Vicksburg’s 22-yard line, and then scored on its first play from scrimmage to jump out to a 6-0 lead.

It was the first time Vicksburg has trailed in a game since losing 20-18 to Warren Central in Week 2. It had scored first in eight consecutive games after that, and won them all. Three of those victories were shutouts.

Vicksburg went on to win 36-14 and advanced to the second round of the MHSAA Class 5A playoffs. It will host Callaway on Nov. 18 at 7 p.m.

“It’s been a while,” Vicksburg coach Todd McDaniel laughed when asked if he remembered the last time his team had trailed. “It didn’t faze us. Two years ago we would have thought the world was ending. Now? OK, let’s go and get these points. They understand what’s going on now. That’s what I’m more happy about.”

2
What was a bit of an uneven season by its high standards ended with a very familiar scene for East Mississippi Community College.

The Lions defeated Northwest Mississippi 36-28 on Saturday to win their eighth Mississippi Association of Community Colleges Conference championship in 14 years.

East Mississippi finished with an 8-3 record — only the third time in head coach Buddy Stephens’ 14-year tenure it has had at least three losses in a season — but won its last four games to take the state title.

One of EMCC’s three losses came at the hands of Northwest Mississippi (10-1) in September, but the Lions rolled in the rematch. Rodney Groce Jr. returned an interception for a touchdown and Mike McGowan scored on a 28-yard run as EMCC jumped out to a 20-0 lead in the first quarter.

A 34-yard touchdown pass from Eli Anderson to Duke Miller early in the third quarter pushed the lead to 27-7, and then

Northwest mounted a comeback. Ren Hefley threw two touchdown passes in the second half to bring the Rangers as close as 30-28 with 10:56 left in the game.

East Mississippi answered with a 24-yard TD pass from Anderson to Miller with 6:37 to go to make it 36-28, and Northwest’s next possession resulted in a turnover on downs at the EMCC 23-yard line. East Mississippi then was able to pick up three first downs and run out the clock.

For Northwest Mississippi, Hefley completed 21 of 41 passes for 183 yards, with three touchdowns and one interception. D.T. Sheffield caught eight passes for 100 yards and two TDs.

Sam Brumfield had 18 tackles for the Rangers, while former Warren Central star Tevin Bell had five.

3
Josh Morgan is getting into some rare air among Warren County’s greatest football coaches.

Morgan earned his 91st victory at Warren Central by beating Gulfport 38-3 in the first round of the MHSAA Class 6A playoffs on Friday. It broke a tie with longtime Vicksburg High coach James W. Knox for the fourth-most ever among Warren County coaches.

Although a few have won more games overall, only three others — Robert Morgan (168) and Lum Wright Sr. (125) at Warren Central, and Joe Balzli (115) at St. Aloysius — have gotten to 100 victories solely at a Warren County school.

4
Vanderbilt ended a long list of losing streaks with its 24-21 victory over Kentucky on Saturday.

The Commodores had lost 26 consecutive Southeastern Conference games — 16 of those on the road — and 28 in a row against Power 5 opponents. They had lost their last five games this season as well, after a promising 3-1 start.

Although Vandy had not won an SEC game since 2019, it still had a long way to go to match the conference’s — or event its own — benchmark for futility.

Vanderbilt also lost 23 consecutive league games between 2000-03 and 22 games between 1995-98, which means the program now has four of the five longest losing streaks in SEC history.

The longest active losing streak in the SEC now belongs to Texas A&M, which has dropped six straight games after winning its league opener vs. Arkansas in September.