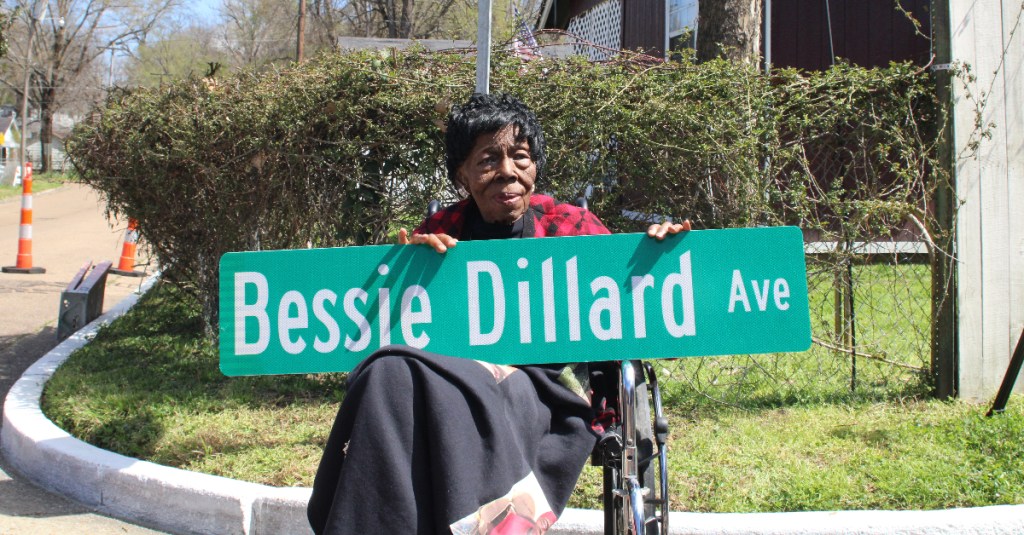 Bessie Richardson Dillard holds a copy of the street sign renaming Hannah Avenue as Bessie Richardson Dillard Avenue in her honor. Dillard, the mother of 10 children, returned to school in her 40s to receive a bachelor's, master's and specialist degrees in elementary education and taught in the Vicksburg Warren School District. (Photo by John Surratt | The Vicksburg Post)

A small group of friends and relatives gathered in March on Hanna Avenue in Marcus Bottom for a ceremony honoring an amazing woman and ensuring that her name would be remembered by future generations through a simple act.

During that ceremony on Hannah Avenue, the street where then-102-year-old Bessie Dillard had lived for 54 years, was renamed Bessie Richardson Dillard Avenue to honor her accomplishments in the community and as an educator.

But Dillard, who died Nov. 11 at her home, will be remembered for more than the 23 years she spent as a teacher in the Vicksburg Warren School System — her story is more involved than that.

During the street dedication, Mayor George Flaggs Jr. said Dillard’s story “is something young people may not ever get a chance to read in the history books.

“It’s about a young lady who started her career in education at the age of 40-something and with 10 kids and she went off to matriculate at college to get a bachelor’s degree to get a master’s degree and then a Ph.D. The only thing that was short about this lady was a dissertation.”

“My mom was the most amazing woman I’ve ever met in my whole life, and I don’t say that because she was my mother; I say it because of who she was,” said daughter Linda Sweezer-Rowster. “She was a woman that was loved by the multitudes, not just myself but the church family, the community; everybody loved her. She was kind to people and she was the kind of person that invited anybody and everybody into her home and to her table. She was a cook beyond words that could describe. All of her dishes that she cooked were delicious and she had a great, great, spirit of hospitality.”

The pastor of House of Peace Worship Church International, Sweezer-Rowster said her mother was one of the strongest Christians she had ever seen, “because she not only said she was a Christian; she lived the life of a virtuous woman.

“Mom was an educator. She was the mother of 10 children,” Sweezer-Rowster added. “She had six boys and four girls, and then she adopted two more into the family who are, totally to us, biological children.”

She said her mother’s decision to return to school was one of the things that impressed the mayor.

“She’s a longtime educator in our community,” Flaggs said Monday. “She’s a pioneer when it comes to education and how important education is to our young people and she’s going to be missed for generations and generations and my prayers go out to her family.”

Daughter Felicia Jones recalled a passage in John 13:35 that described her mother: “By this everyone will know you are my disciple if you love one another.”

“Her love was just beyond measure,” she said. “She loved like nobody else I’ve ever known. Her capacity for love was so great and she was a woman; it wasn’t so much about what she said but it was about her actions that showed more Christianity. She didn’t just talk the talk, she walked the walk. It spoke volumes for my life. It impacted my life to such a great extent that I don’t have words to be able to express it. Her love was beyond measure.”

Daughter Marilyn Dillard said her mother was a master teacher.

“She not only taught her children at home, but she also taught children in school. Not only did she teach those children at school, but there were also things she would grant to her sister’s children,” she said. “She would often wonder how they were doing in school; she would ask her sister to see her children’s grades and if the grades weren’t up to par she would show them how to get them up to par.”

Dillard, she said, was also very gracious and loved to entertain people.

“She loved to invite people to her house,” Marilyn said. “She just loved people and she didn’t always have to talk; you could look at her and know that they were loved by her they wanted to get to know her because of her smile and because she was just a mild woman who said things with her eyes.”

Former Vicksburg Mayor Robert Walker, whose family lived on Togo Street in Marcus Bottom, said Dillard “was a great woman. She was a pillar of that community there. In fact, I was in school with some of her children and am very close to them now — Pastor Sweezer and all of them.”

“I, on behalf of my family, wish to extend our condolences to them,” Walker said.

Granddaughter Ann Sweezer-Rogers said her grandmother “was one of my best friends. Every high and low point I had in my life, she was right there.”

She said Dillard always called the kitchen her office because it was the place where family members met for her counsel and advice.

“Not only that, but you had to drink some coffee with her or eat something if you were coming to the kitchen with her. She didn’t want you to just sit there and not have something.

“She was an encourager for many, a prayer warrior and just a force of stability for many; not just myself but family members and community members and even for our church family. She’s been a person who others have called on and been encouraged by her.”

If she had to give three words about my mother, Sweezer-Rowster said, “It would be a woman of honor, wisdom and dignity. Even in her last days, she talked to us; all of those 103 years that she lived.

“Even on the last day of her life they (family) were able to talk to her that morning, so God allowed her to live a life of dignity, and she died with so much dignity, and He graced us by taking her so sweetly into heaven.”