Tallulah Academy takes on Tunica for 2A title Thursday 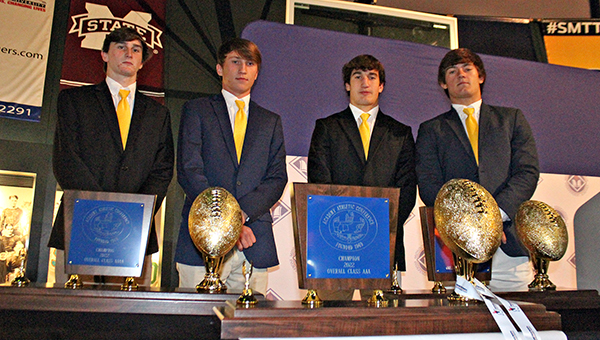 Tallulah Academy seniors Arnett Sevier, Wyatt Bedgood, Henry Ellerbee and Dee Morgan stand in front of several of the MAIS football championship trophies that will be awarded this weekend. Tallulah will play Tunica Academy for the Class 2A title Thursday at 3 p.m. at Jackson Academy (Ernest Bowker/The Vicksburg Post)

JACKSON — When it was suggested that several of his players hold the Class 2A trophy at Monday’s MAIS championship game game press conference, Tallulah Academy coach Bart Wood flat out refused.

The Trojans have largely made their own luck this season, but a bit of extra goodwill with the football gods never hurts.

Tallulah Academy (10-1) will take on Tunica Academy (12-0) for the MAIS Class 2A championship Thursday at 3 p.m. at Jackson Academy. It’s a showdown between the top two seeds in the bracket, and the first time the schools have ever played each other.

Tallulah is making its sixth appearance in nine seasons in an 8-man championship game, but facing a completely new opponent adds a different wrinkle to an otherwise familiar setting.

“We know zero about them. I met their coach today. I don’t think we’ve played them in any sport. We’ve never been to their school, they’ve never been to ours,” Wood said. “It’s kind of crazy. Usually you know something, but we haven’t even played any common opponents where I’ve seen them on film this year. That’s all I did Saturday and Sunday was watch film on them.”

Besides having the same “TA” monograms, both Tallulah Academy and Tunica Academy have at least one thing in common — high-scoring offenses. Tallulah has averaged 50.1 points per game, and Tunica 51.9. Each team has been held to less than 40 points only once.

“They’re really athletic. They have a couple of good athletes and they try to get the ball in their hands a lot,” said Tallulah quarterback Dee Morgan, who has run for 14 touchdowns and thrown for 16 this season. “We’re just going to try to slow them down and do what we do on offense.”

Both teams celebrated their last state championship in 2018. Tunica won the Class 1A title in the MAIS’ 11-man division that season, while Tallulah won the 8-man championship.

Four years is not a long time to go between state titles, but for Tallulah it has felt like an eternity. The Trojans won it all in 2015, 2016 and 2018, and then lost in the 2020 Class 1A 8-man championship game. Wood said even being two years removed from the last trip to Jackson is enough to make it a new experience.

Championship week has a much different routine than a normal game week, starting with Monday’s press conference at the Mississippi Sports Hall of Fame and Museum to kickoff on Thursday afternoon rather than Friday night.

“It helps to know where to go and what to do, but other than that, no, because it’s a whole new group of boys,” Wood said. “The seniors were sophomores when we came (in 2020), but the rest of them hadn’t been here. We’re not lost as coaches, but everything is new to everybody else.”

Since Tallulah switched to 8-man football in 2014, every senior class has won at least one state championship. There are 10 seniors on the roster this season, many of whom played if not started in 2020, and keeping that tradition going is important to them.

“We’ve got a bunch of seniors who have been trying to get back here since sophomore year. Last year we came up short. It just means a lot,” said senior running back Wyatt Bedgood, who has rushed for 825 yards and 13 touchdowns this season. “It’s a pretty big tradition and it’s really important to carry it on.”

More than tradition, Wood added, he just wants his players to win for themselves and create a memory and bond they’ll share forever.

“It’s an honor being here, but winning it is just icing on the cake,” Wood said. “You’re going to make memories no matter what. This will be a memory you remember the rest of your life. But you can make the memory a lot better.”

MAIS CLASS 2A CHAMPIONSHIP
• Tallulah Academy (10-1) vs. Tunica Academy (12-0)
• Thursday, 3 p.m., at Jackson Academy
• All MAIS championship games will be streamed on the MAIS Network