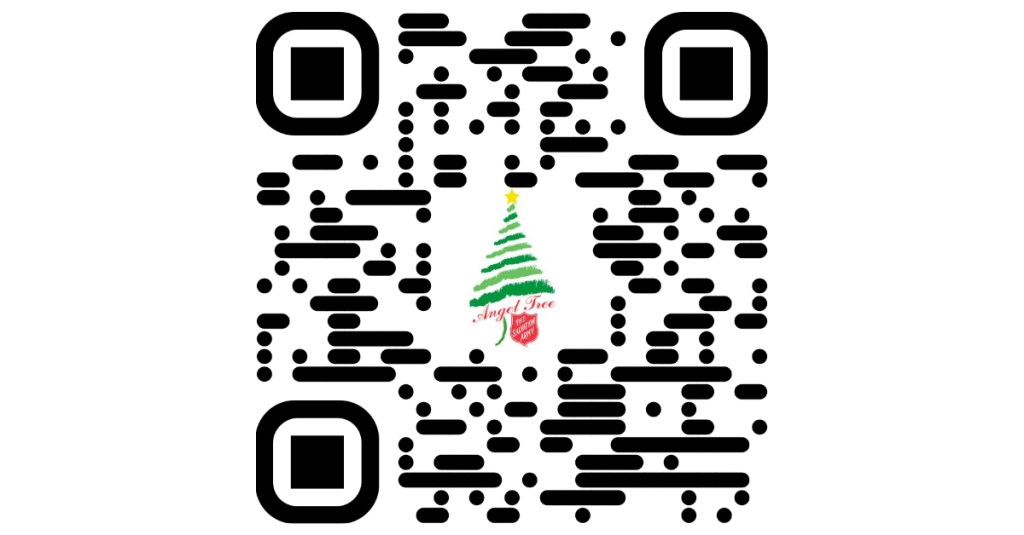 Those who want to adopt a local Salvation Army Angel can do so by scanning this QR code beginning Friday, Nov. 18.

The Salvation Army is set to kick off its annual Angel Tree program and Red Kettle Campaign this Friday.

The event, which is a combined fundraising campaign with a focus on the Angel Tree, will begin at 6 p.m. at Uptown Vicksburg, formerly the Pemberton Mall, in the hallway next to Dillard’s. During the event, Vicksburg Mayor George Flaggs Jr. will be on hand and children from Crossway Church will perform a dance.

This year, Major Janna Torgerson said, she has more than 800 Angels — 480 children and 376 seniors/disabled angels — to be adopted from the service area of Warren, Issaquena, Sharkey and Claiborne counties.

Torgerson said the number of angels is an increase of about 100 from last year and feels this is due to a couple of factors.

“Inflation is a big one,” she said, as well as the residual effects of the COVID-19 pandemic. “We are still recovering from COVID, and people are still trying to catch up from the financial hits they took during COVID — finding a job and trying to catch up on rent or mortgage and utility payments and just trying to get back to breaking even so they can start doing savings. It’s just hard out there.”

And that’s across the board, Torgerson said, which is why she is encouraging people to adopt angels from the SA Angel Tree.

For those interested in adopting, Torgerson said, ideas for gifts will be listed on the Angel tags.

“People are not limited to that, but it gives some ideas as to what a child likes,” she said, or what could benefit a senior.

This year, in addition to physically pulling a tag from the Angel Tree or dropping a cash donation into a Red Kettle, Torgerson said, other platforms including the SA website will be available for giving.

“At each Kettle stand there is going to be a sticker with a QR code where, if people don’t have cash but still want to give, we can accept Apple Pay, Google Pay, credit cards, Venmo and all those platforms that scan a QR code,” she said.

Angels from the Angel Tree can also be adopted online.

“And if someone wants to go above and beyond, they can also create their own online Kettle using the vicksburgkettle.org platform and create their team and become a fundraiser. All of those funds that come through online come directly to the Salvation Army here in Vicksburg,” Torgerson said. “This is a simple website and things have been made really simple as far as giving goes.”

The SA Angel Tree will remain up until Dec. 10 or 11, Torgerson said.

Gifts should be returned to the place where they were adopted either at the mall, 3505 Pemberton Square Blvd., or if adopted online to the Salvation Army facility, 530 Mission 66.

For those interested in volunteering for the Red Kettle Campaign, Torgerson said, they could call the SA office, 601-456-4444, and ask for Trudy Brown, who is in charge of the Kettle volunteers.

Donations to the Salvation Army Angel Tree can also be made at Walmart.

“We will have a Forgotten Angel Tree at Walmart, which is a way for us to collect toys for Angels that were not adopted or that were adopted, and the adopter forgot or lost their Angel,” Torgerson said. “This will allow us to have toys to give to that child or senior.”

The Forgotten Angel tags, like the Angel tags, will also have gift ideas listed, Torgerson said.

“So, they can get whatever gift they want and put them into the bins near the tree,” she said.

Torgerson said one can also go to Walmartangeltree.com to donate locally.

“They can put in their zip code and that will take you to the Salvation Army of Vicksburg registry that has toy ideas. You can click on one of those and purchase it and it will get shipped directly to us,” she said. “There are so many ways to give, and we want to make it easy for people to give.”