LOOKING BACK: The many faces of two 1400 block mainstays 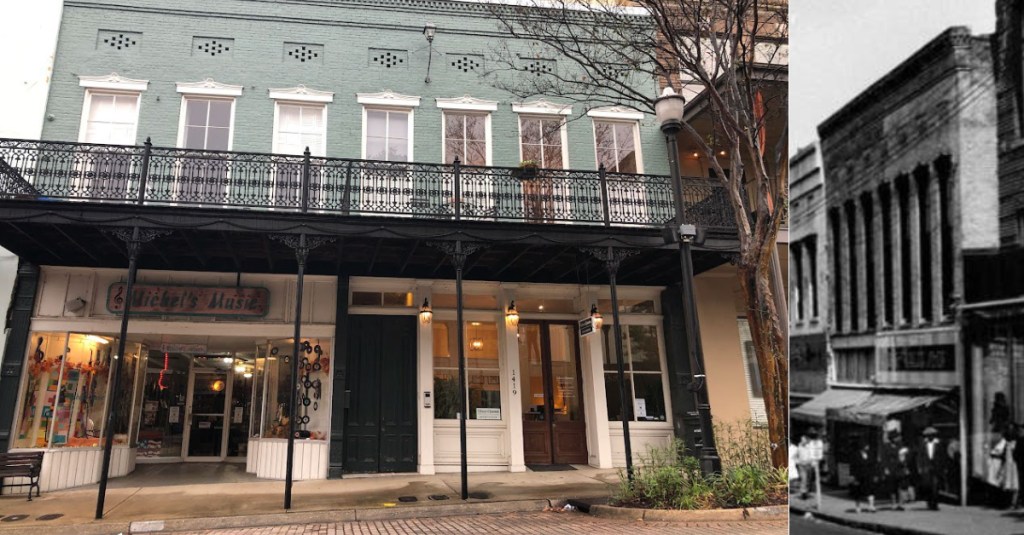 LEFT: The 1417-1419 building as it stands today. The building has been completely rehabilitated and now houses Edward Jones Financial Advisor, Wayne Pratt, and Michel’s Music Shop. RIGHT: The original look of the 1417-1419 Washington St. building, constructed in 1889. (Photos Submitted)

The two-story, two-storefront building at 1417-1419 Washington St. was erected about 1889 on the east side of the street, next to what is now the Valley.

It replaced two one-story commercial buildings. The left half was used in 1889 for a giant “fire sale.” The Daily Commercial Herald reported that “Thou art in thy glory. Never before on thy streets was such a crowd of men, women and children seen at one time. Well the opening of the big New York fire sale of clothing, hats, etc., caused it all. The excitement ran high. Fully 2,000 people tried to get in at one time, and why blame them? The sale opened and Suits, Pants and Hats were slaughtered right and left. $25 suits were sold for $12.50.”

The article listed other half-priced items and stated that the sale would end when all items were sold. The building then housed W.H. Miller Grocery (1890), Vicksburg Furniture Company (1893), a Business College on the second floor in 1896 which taught shorthand and bookkeeping to both sexes, C.E. Wright and Son Grocery (1896) and the New Idea Restaurant in 1907.

An article in the Monday Morning News sets out to describe the restaurant, without actually getting into specifics.

“The New Idea Restaurant is well and favorably known to the public and it has admirably filled the position of a first-class restaurant and has won not only a steady custom from local people but from the great army of transients who visit Vicksburg as well. The dining room is arranged so as to seat all patrons comfortably and without undue crowding, and the bill of fare provided daily is one that appeals to the appetites of a throng of hungry patrons. The prices charged are extremely moderate when the quality of the various dishes served is considered, and popular rates have done much to add to the reputation this restaurant has gained. A specialty is made of short orders and the service is excellent.”

By 1911, it was the Edward Burris Restaurant with W.H. Shirley Loans on the second floor. In 1918, E.P. Auter, a watchmaker was listed as occupying the first floor and R.S. Jones and Company on the second.

They were followed by Piggly Wiggly in 1926, E.C. Amborn Jewelry and Sages Bootery in 1929, who were joined in 1935 by The Style Shop. By 1937, Sages had moved to a new location and the Dixie Dress Shop was located there. The Style Shop was the only business listed in 1941 and eventually, it would be the home for Michel’s Record Shop, which it continues to be today.

The storefront on the right was a barbershop in the late 1880s, then the office for W.O. Worrell and Co. by 1903. In 1906, it was the Crescent Market which sold hams, bacon, fish, oysters, poultry and butter and was owned by S. Soverns and Jonathan Halpin, Jr.

On the second floor were the offices of Dr. J.A. Miller, an African American doctor, and the Post Job Printing Company. By 1911, the first floor was John Pichetto’s Fruit Store and then in 1918, the New York Café and Dr. Smith Optical Co. This was followed by Barker Bakery (1926), Clarence Saunders Grocery (1929), Bargain Market Grocery (1935) and True Value Shop (1937-the 1940s). The building has been completely rehabilitated and this side now houses Edward Jones Financial Advisor, Wayne Pratt.