Region 2-5A rivals Vicksburg, Callaway meet for rare trip to Class 5A semifinals 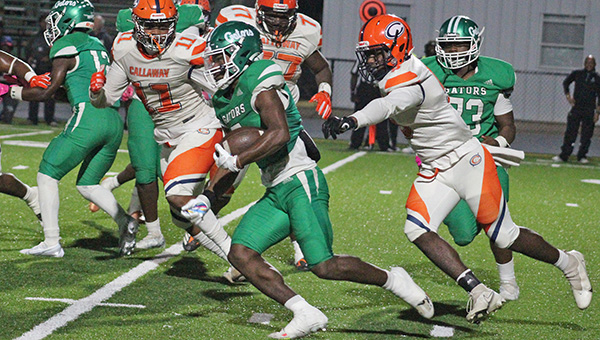 Vicksburg High running back Johnny Smith Jr. (5) carries the football against Callaway in October. Vicksburg and Callaway will play each other again Friday at 7 p.m. at Memorial Stadium, in the second round of the MHSAA Class 5A playoffs. (Ernest Bowker/The Vicksburg Post)

On one side of the MHSAA Class 5A North playoff bracket sit two traditional, familiar powers with West Point and Neshoba Central.

The other side belongs to the disruptors.

Vicksburg High (9-2) and Callaway (9-2) will go head-to-head Friday at 7 p.m. at Memorial Stadium eyeing a rare trip into the deep water of the postseason.

“Being at this point, it’s really good for both programs. But Friday night we’ve got to separate ourselves apart,” Vicksburg head coach Todd McDaniel said.

Although they’re playing for a trip to new territory, Vicksburg and Callaway have plenty of history with each other. They’ve been paired together in Region 2-5A since 2017, and often in other regions for years before that. This is the 37th time they’ve played each other.

McDaniel said it was important for his team to not rely on past success as an indicator of future performance.

“They’re a good football team, and it’s hard to beat a good football team twice,” McDaniel said. “You have to let your kids know that you beat them before, but this is the most important game that we’ve played against them. So let’s get out here and play football, and do the things necessary to win the football game.”

For Vicksburg, those things are running the football and playing outstanding defense — two core values of any successful team.

In the regular season meeting, Vicksburg’s held Callaway to 155 total yards while its offense threw one pass in the second half and finished with 179 rushing yards.

“We were able to drive the ball down the field and not turn the ball over. That was the main thing. We forced some turnovers and won the special teams battle that night,” McDaniel said. “To beat them again we’re going to have to come out with that same formula. We can’t turn the football over, can’t put our defense in bad positions. We also need to be ourselves and have fun.”

The Gators have allowed 107 points in 11 games, which is the fewest in Class 5A. They had three 100-yard rushers and ran for 414 yards in their first-round game against Cleveland Central last week. The 36-14 victory was Vicksburg’s ninth in a row, its longest winning streak since the 1993 team won 10 in a row.

McDaniel said not resting on their laurels will be the key to matching that number — and possibly surpassing it. The winner between Vicksburg and Callaway will face either West Point or Neshoba Central next week.

“We’re hitting on a lot of cylinders right now, but at this time of year you’ve got to. One bad game and your season’s over. Everything is rented, it’s not owned,” McDaniel said. “We have to make sure when we get out there on that field the reason we’re having success is because we’re playing hard, we’re working hard and we’ve got to continue to play hard and not make the mental mistakes.”

CALLAWAY AT VICKSBURG
• Friday, 7 p.m.
• MHSAA Class 5A playoffs, second round
• Radio: 107.7 FM
• Tickets are available online only through GoFan.co