Warren Central and Brandon do battle again in Class 6A playoffs 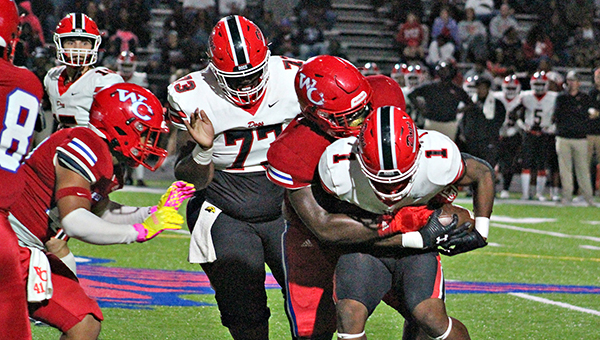 Warren Central has gone through an evolution in its series with Brandon over the past two seasons.

When the teams played in the 2021 regular season, Brandon used its high-tempo offense to blow the doors off the Vikings. The playoff rematch was more competitive, but Brandon still won convincingly.

In September, Warren Central kept the Bulldogs in check as well as anyone has this season but a few ill-timed mistakes led to a 21-3 defeat.

On Friday, Warren Central (10-1) gets another shot when it goes on the road to Brandon (10-1) for the second round of the MHSAA Class 6A playoffs. The Vikings have gotten closer and closer to the Bulldogs each time they’ve played, and passing them up now will make all of those other meetings melt away.

“I think we’re a better football team than the last time we played them, but I’m sure they are too. I think the more you play, you get better with it,” Warren Central head coach Josh Morgan said.

Brandon routed Hancock 42-7 in its playoff opener last week, and is trying to take the next step toward a second consecutive appearance in the Class 6A championship game.

Warren Central is in the second round for the third year in a row and trying to break through to the late stages of the postseason. Morgan, though, said everyone in the program is maintaining a laser-like focus on the week-to-week process rather than pondering the big picture.

“I really haven’t had an opportunity to think like that. You can’t get caught up in that. All my focus is on trying to prepare my guys and play a really good Brandon team. That’s where I want our guys’ focus to be,” Morgan said. “We’ve had a great season and we want to keep playing. If we want to keep playing we’re going to have to earn it, and that’s what we’re getting ready to do.”

Warren Central has used a variety of approaches to find success, ranging from big plays to long clock-killing drives on offense, and a defense that’s able to both shut down opponents and force turnovers. It has a plus-18 turnover margin, with four takeaways in last week’s 38-3 win over Gulfport.

“That’s our identity, is playing really good, sound football, taking care of the football and controlling the clock,” Morgan said. “We’re not going to try to be anything we’re not. We just want to be really good at what we feel comfortable doing, and what fits us personnel-wise ­— being the best version of ourselves and sticking to our identity within that game plan. That’s how we have success.”

Brandon has had an effective defense, but mostly uses its high-powered offense to bludgeon opponents into submission. The Bulldogs average 473.3 yards and 36.7 points per game. Warren Central held them to 21 points, their second-lowest total of the season, in September. Brandon scored twice on fourth down plays, and all of its points came in the second quarter.

Execution is always important, but Morgan said it was a blueprint for what the Vikings need to do to win.

“One of the good things we did the last time we played them, was we turned it into our type of game. We just didn’t make the plays,” Morgan said. “The pace was our style. We had some stops and moved the ball well. We just have to do a better job finishing drives and preventing big plays.”

Despite playing four hours away at Gulfport last week, Morgan said the fans who traveled to the Coast to support the Vikings made it feel like a home game. He’s hoping for a similar atmosphere in Round 2.

As the team rolled out for the long trip to the Coast last week, Warren Central supporters lined Highway 27 to give them a send-off. There are plans to do the same this week when the buses leave for Brandon at 3 p.m. Anyone wishing to join is encouraged to.

“I looked up and I think we had more fans than Gulfport had. Our fans are important to us. Players really thrive off of that, and support goes a long way,” Morgan said. “We need another really big showing at Brandon this week when we’re going after something really special. They sure do help.”