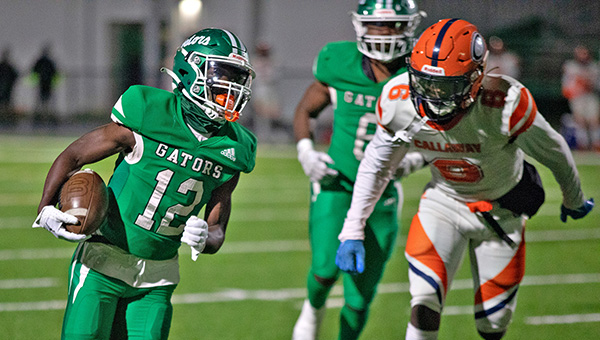 Vicksburg High running back DeCorey Knight breaks off a big run Friday against Callaway. Knight ran for three TDs to lead the Gators to a 27-22 victory in the second round of the MHSAA Class 5A playoffs. (Ben Martin/The Vicksburg Post) 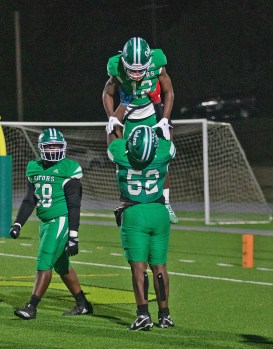 Vicksburg High lineman Demarcus Johnson (52) lifts running back DeCorey Knight (12) into the air after Knight scored a touchdown Friday against Callaway. Knight ran for three TDs to lead the Gators to a 27-22 victory in the second round of the MHSAA Class 5A playoffs. (Ben Martin/The Vicksburg Post)

When he took over Vicksburg High’s football program in 2020, head coach Todd McDaniel talked about getting the Gators into a position to play late for championships late in November.

It is no longer wishful thinking or idle chatter.

DeCorey Knight scored three rushing touchdowns, Malik Montgomery had an 85-yard TD run, and Vicksburg defeated Callaway 27-22 on Friday in the second round of the MHSAA Class 5A playoffs.

The win sent Vicksburg (10-2) on to the semifinals for the first time since 2001. It will play West Point at home next Friday for a trip to the Class 5A championship game in Hattiesburg on Dec. 3.

Vicksburg beat Callaway 30-7 in the regular season, but had to hang on in this one.

Knight scored on a 33-yard run and two short runs as the Gators built a 27-0 lead in the first half. Several offensive linemen suffered minor injuries, which slowed the offense to a crawl in the second half.

Callaway got within one score, but Vicksburg escaped.

The Gators will come back to Memorial Stadium next week for their biggest game in 21 years.

The opponent will be West Point, which beat Neshoba Central 34-33 in another second-round game Friday. West Point has been to six consecutive Class 5A championship games, and beat Vicksburg on the road to No. 6 in 2021.

“To be honest, we don’t care if it’s the Bears coming down here,” McDaniel said. “We’re going to be playing for the North State championship, and whoever shows up that’s who we’re going to play. But in order to beat the man you’ve got to beat the man.”