Saints pull out of funk by beating Rams 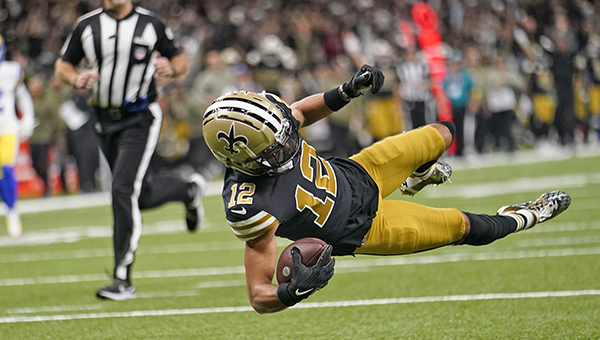 NEW ORLEANS (AP) — Andy Dalton could sense the Rams’ Aaron Donald closing quickly from the left edge on a third-and-9 play late in the third quarter of a three-point game.

New Orleans’ quarterback unloaded a high, deep throw down the middle of the field a moment before being flung to the turf. The crescendo of cheers filling the Superdome let Dalton know that rookie receiver Chris Olave had run under the ball, caught it and dove across the goal line for a pivotal 53-yard score.

Dalton passed for three touchdowns, Los Angeles QB Mathew Stafford left the field to be evaluated for a concussion in the second half, and New Orleans defeated the reeling Rams 27-20 on Sunday.

“I was pretty aware,” Dalton said with a grin when asked if he noticed Donald’s imposing, All-Pro presence barreling in from his blind side as he released his deep scoring pass. “Half a second longer, that’s a sack (or) incomplete pass. … If you can play on time at the quarterback position and get the ball out, good things can happen.”

While good things indeed happened for a Saints offense looking to bounce back from its worst games this season during the previous two weeks, the defending champion Rams (3-7) were dealt another bad break en route to their fourth straight loss.

Stafford’s departure came two days after he’d been cleared to return from the NFL’s concussion protocol.

After the game, the Rams said Stafford is not in concussion protocol again, but a decision on that will come after more tests in the coming days.

“Obviously we need to make a smart decision for Matthew and see where we’re at,” Rams coach Sean McVay said. “I know how he was feeling, and we made the decision it was going to be in his best interest to not have him continue to play.”

Stafford was effective in the first half, after which the Rams led 14-10, and he left the game having completed 11 of 18 passes for 159 yards and two touchdowns, including a 62-yarder to Tutu Atwell.

He appeared to hit his head on the turf during a third-quarter possession and was subsequently sacked by blitzing linebacker Demario Davis and defensive end Tanoh Kpassagnon to end the last drive he played before walking down the tunnel toward the locker room.

And even before Stafford left, the Rams lost left tackle Ty Nsekhe to an ankle injury.

“The truth is, overcoming some of those things becomes a real challenge and changes the way that you’re really able to operate,” McVay said.

Stafford was replaced by Bryce Perkins, who led the Rams to a field goal on his first series, but struggled thereafter. He was sacked twice to stall his third series late in the fourth quarter, all but sealing the game’s result. Los Angeles didn’t pull within a touchdown until Matt Gay’s 58-yard field goal with 6 seconds remaining, and the Saints recovered a subsequent onside kick.

Dalton’s performance validated a decision by the Saints (4-7) to stick with him rather than go back to Jameis Winston, who has not played since Week 3, when he was struggling with back and ankle injuries, but has said he’s ready to return.

Dalton, who completed 21 of 25 passes for 260 yards, credited the coaches for dialing up an aggressive game plan and urging players to try to have fun with it.

“What we need to do is cut it loose. Why not?” Dalton said. “That’s just the mindset, the mentality that we have to have.”

Saints defenders combined for four sacks, with 1 1/2 each coming from end Carl Granderson and linebacker Kaden Ellis, a pair of young reserves taking more snaps because of injuries.

“We’re well aware of where we’re at in the season,” said first-year coach Dennis Allen, who also calls the defense. “Our guys came out and they were swinging today. It was good to see.”

Former LSU star and Louisiana native Jarvis Landry caught his first touchdown pass as a Saint when Dalton found him over the middle from 7 yards to put the Saints in front for good at 17-14 early in the third quarter.

The Rams had an early 7-3 lead when Stafford spotted Atwell in one-on-one coverage with Chris Harris Jr. and dropped a deep pass into the receiver’s arms along the left sideline.

New Orleans went back in front on Dalton’s 8-yard pass to tight end Juwan Johnson before Stafford hit Allen Robinson from 6 yards at the end of the first half to make it 14-10.