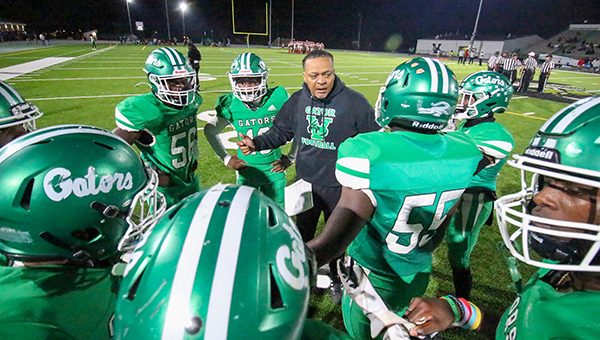 Vicksburg High football head coach Todd McDaniel talks to his team during a game earlier this season. McDaniel and his coaching staff were named the MHSAA Region 2-5A Coaching Staff of the Year, and 27 players were named to the All-Region team. (Walter Frazier/For The Vicksburg Post)

1
Vicksburg High plowed through all of its Region 2-5A competition this season with a veritable all-star team loaded with Division I prospects for this year and next.

Twenty-seven Vicksburg players were selected to the All-Region 2-5A team — nine on the first team, 11 on the second team, and three honorable mention — and the Gators hauled in several of the league’s individual awards as well.

Johnson has more than 70 tackles and eight sacks this season. Montgomery has scored a touchdown in 11 consecutive games and has 16 rushing TDs total.

Caleb Bryant was named the Co-Defensive Lineman of the Year, and Nick Mickey was recognized as the region’s top defensive back. Bryant has 56 tackles and six sacks, and Mickey has more than 60 tackles and three interceptions.
In addition, Vicksburg was selected as the Region 2-5A Coaching Staff of the Year for guiding the program to its first region championship since 1990.

“We had a great year and those kids and coaches worked their tails off to get this No. 1 seed, and that’s why we have that many,” Vicksburg head coach Todd McDaniel said. “I’m just happy for the kids. It’s something that they needed, and something that they wanted and they worked for it.”

2
Ole Miss suffered an embarrassing 42-27 loss to Arkansas on Saturday, but set a slew of offensive records.

Quinshon Judkins and Zach Evans became the first pair of players in Ole Miss history to each rush for more than 200 yards in the same game. Judkins finished with 214 yards, and Evans had 207. It’s only the eighth time it has ever happened in a Football Bowl Subdivision game.

Judkins now has 1,385 yards, with the Egg Bowl against Mississippi State on Thanksgiving night and a postseason bowl game still to play. Dottley ran for 1,312 yards in 1949, and his record stood until Saturday night.

Judkins, a freshman, also joined Dottley as the only Ole Miss players with multiple 200-yard rushing games. Judkins has gone over that mark twice this season, while Dottley did it three times.

Ole Miss finished with 463 rushing yards and 703 total yards against Arkansas. Both totals rank among the top five offensive performances in school history.

3
Tallulah Academy made some unwanted history in the MAIS Class 2A championship game last Thursday.

Tallulah lost 46-6 to Tunica Academy, matching the lowest point total in an MAIS 8-man championship game since the division was created in 2009.

The Trojans joined Humphreys Academy, which lost 54-6 to Briarfield Academy in 2017, as the only teams in 18 8-man championship games to be held to six points or less. The MAIS had one 8-man classification from 2009 to 2018, and then split it into two classes starting in 2019.

Coincidentally, Tallulah Academy also owns the record for most points allowed in a championship game. It lost 82-42 to Sharkey-Issaquena Academy in 2014.

4
Mississippi State cornerback Emmanuel Forbes has shown a nose for the football throughout his career, and now has something tangible to prove it.

Forbes returned an interception 82 yards for a touchdown in the second quarter of a 56-7 blowout victory against East Tennessee State on Saturday. It was the sixth interception return touchdown of his college career, which is the most in Football Bowl Subdivision history.

“It was a goal I had coming out of high school,” the junior out of Grenada said. “It was a really cool moment to get to do it in front of my family and all the great fans here at Mississippi State.”

Forbes’ record-breaker came early in the second quarter. East Tennessee State quarterback Baron May threw a pass that deflected off the foot of receiver Cameron Lewis and into Forbes’ hands. Forbes stumbled, regained his footing and did a quick spin move, and then sprinted the length of the field untouched for touchdown No. 5.

“I did a spin move, saw some grass and just ran as fast as I could,” Forbes said.

Forbes had three interception returns in 2020 and three more this season, and could have another season to add to his total — as well as make a run at another.

Forbes has 390 return yards on 14 career interceptions. The FBS record is 501, set by Florida State’s Terrell Buckley — a Mississippi native and former Mississippi State assistant — from 1989-91.

Mississippi State will play at Ole Miss in the Egg Bowl Thursday at 6 p.m. on ESPN.