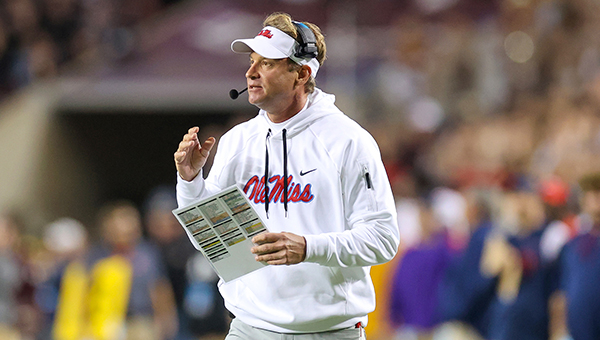 No topic is hotter in Mississippi college football this week than Kiffin’s future as Ole Miss’ head coach, not even his team’s annual rivalry game against Mississippi State on Thanksgiving night.

While Auburn is reportedly interested in luring Kiffin away from Ole Miss with a huge contract, the coach said at his weekly press conference Monday that he is happy to be in Oxford and has no plans to leave.

“I’m extremely happy here. Like we just talked about, the difference in where this program is now compared to three years ago. We feel that we have really good support. I can get up here and give you, whatever it was, the ‘pine box’ speech, ‘I’m not going to be the next head coach at Alabama,’” Kiffin said, referencing the remarks Tommy Tuberville made at Ole Miss in 1998 before leaving to become Auburn’s coach two days later.

“I can give you those things. I don’t know what those mean. I don’t know what else to say,” Kiffin added. “Been here three years and been fortunate enough, I guess now I have three different contracts. So I don’t know why all of a sudden a fourth contract makes people feel better. Like I said, we’re very appreciative of everything here.”

Jon Sokoloff, the sports director at WCBI-TV in Columbus, tweeted Monday evening that — according to unnamed sources — Kiffin plans to step down on Friday.

Kiffin responded with several mocking tweets. One included a fake statement, using the same verbiage Sokoloff used, that Sokoloff was leaving for another television station.

The Kiffin-Sokoloff rivalry served as a sideshow to the one between the Rebels and Bulldogs that will have its 115th edition Thursday night.

Ole Miss (8-3, 4-3 Southeastern Conference) has lost its last two games coming in, and three of four. Kiffin said he didn’t think the Auburn chatter was a contributing factor to the slump.

“I think about that. I’ve asked our coaches, ‘Do you think that is an issue?’ They’ve said, ‘no.’ Like analytics, we study the past. We played in the last game at FAU in a conference championship, and that morning ESPN leaked that we were the head coach at Ole Miss and the entire team knew and we went out and won by 40,” Kiffin said. “These same questions were there the same week we were one play away from beating Alabama, so not much analytics to show that would matter about player performance.”

A bigger concern for the Rebels is bouncing back from a strange blowout loss at Arkansas.

Ole Miss had 703 yards of total offense, including 463 rushing, and two 200-yard rushers but still lost 42-27 in a game that wasn’t nearly as close as the final score indicated. Ole Miss trailed 42-6 before scoring 21 points in the fourth quarter.

“Offensively, we had a lot of yards but didn’t finish drives in the red zone and had three turnovers. It has no deal in analytics and what happens,” Kiffin said. “It’s just a reminder of stats that aren’t important, that you can be plus 200 yards in a game over an opponent and still lose the game and not really a close game.”

Mississippi State (7-4, 3-4), meanwhile, is coming off a 56-7 blowout victory against East Tennessee State. Its biggest pieces of drama are trying to dealing with a short week of practice and snapping a two-game losing streak against the rival Rebels.

“People always gravitate toward rivalries. If somehow they left or went to a different conference we’d have them replaced by the end of the week,” Leach said. “If Ole Miss went to the Big East or whatever, we’d replace them with Arkansas or LSU before the following Thursday, wouldn’t we? But for the time being we’re focused on them and let’s get after them.”

Rain is in the forecast for Mississippi on Thanksgiving, which might keep some fans away. Although his Bulldogs are on the road at Vaught-Hemingway Stadium, Leach was hoping they’ll pack out the stadium and make plenty of noise.

“There’s a point where noise is noise, and if your communication is sharp it doesn’t always matter who’s making the noise,” he said. “Noise in and of itself is fun and exciting. A gloomy quiet is no fun either. You like a little noise, a little juice, a little action.”