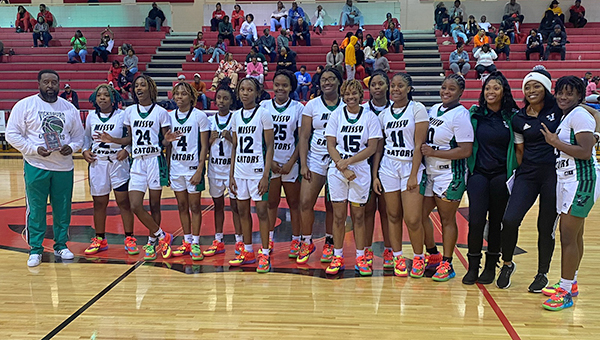 The Vicksburg Missy Gators pose for a photo with the trophy after beating Starkville 52-49 Tuesday in the Just Us Invitational at Clinton High School. (Submitted to The Vicksburg Post)

Vicksburg High’s girls’ basketball team headed into its Thanksgiving break with a sweet helping of victory.

Janiah Caples scored seven of her team-high 21 points in the fourth quarter, and the Missy Gators edged Starkville 52-49 at the Just Us Invitational Tuesday at Clinton High School.

Layla Carter and Ja’Na Colenburg added 12 points apiece for Vicksburg (7-2), which bounced back from a loss to Brandon in its last outing.

Carter scored five straight points late in the third quarter, and Caples converted a three-point play, to give the Missy Gators a 41-40 lead, but the score went back-and-forth until they surged ahead late.
Starkville (5-1) took its first loss of the season.

Vicksburg will have the rest of this week off and then plays three times next week — at Northwest Rankin on Nov. 29; home vs. Natchez on Dec. 2; and at Warren Central on Dec. 3 at noon.