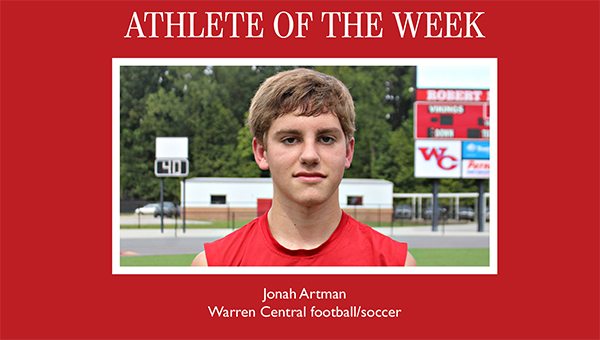 Jonah Artman pulled double duty for Warren Central, and wound up with the single best sports performance of the week.

Artman, a freshman on Warren Central’s football and soccer teams, received 303 of 570 votes in an online poll by The Vicksburg Post’s readers to win the latest Athlete of the Week award.

Artman pulled off a difficult double by playing for Warren Central’s football and boys’ soccer teams on back-to-back days. The kicker went 4-for-4 on PATs and had one touchback on a kickoff in a 36-28 loss to Brandon in the second round of the MHSAA Class 6A football playoffs on Nov. 18. The next day, he scored two goals and assisted on another in a 7-0 soccer win over Vicksburg High.

Artman finished the football season 11-of-12 on field goal attempts and 43-of-44 on PATs. His 11 field goals tied for the third-highest single-season total in Warren County history.

Congratulations to Jonah and the other nominees, and thank you to our readers for voting.