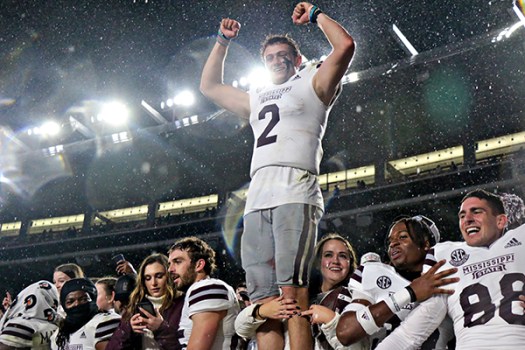 Mississippi State quarterback Will Rogers (2) celebrates with his teammates after the Bulldogs beat Ole Miss 24-22 in the Egg Bowl on Thursday. (Walter Frazier/For The Vicksburg Post) 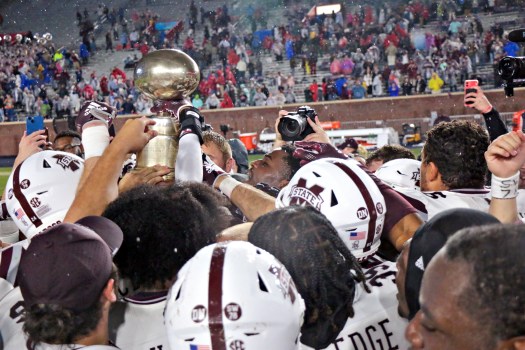 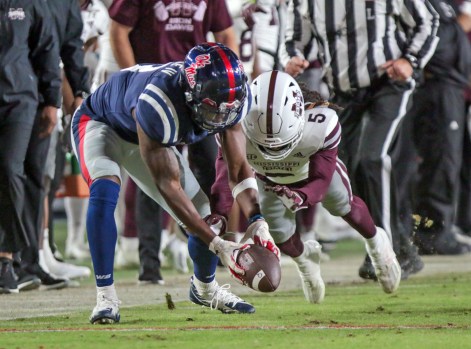 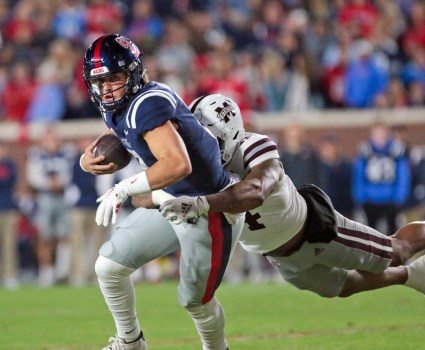 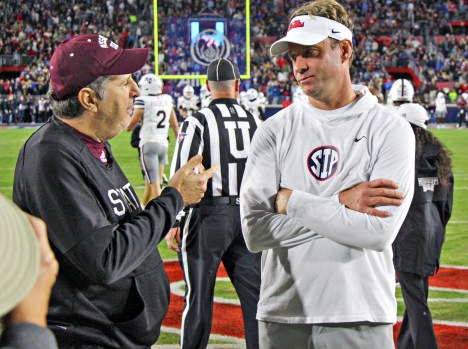 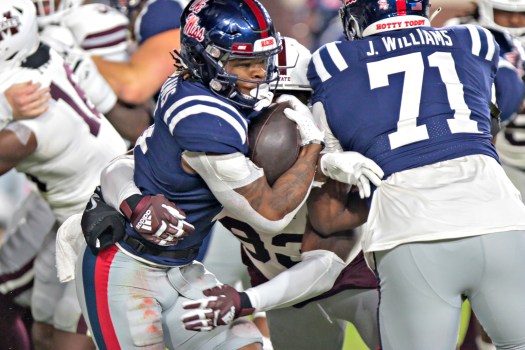 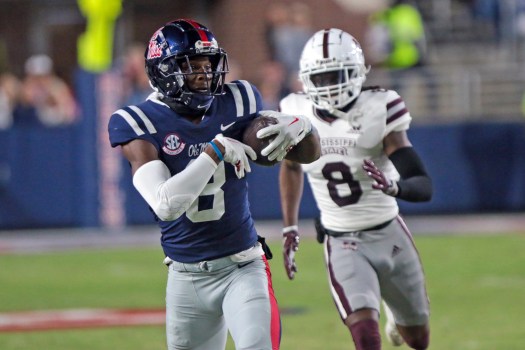 “Both sides let the other think they’d won it,” Leach said. “It was erratic on both sides. Just about the time you think it couldn’t get any crazier, it did.”

Will Rogers passed for two touchdowns and Mississippi State stopped a potential game-tying 2-point conversion with 1:25 remaining to preserve a 24-22 Egg Bowl win over No. 20 Ole Miss on Thursday night.

“This game had a season’s worth of excitement in it,” Leach said. “It was a wild game. An up and down game.”

Mississippi State (8-4, 4-4 Southeastern Conference), which snapped a two-game losing streak in the series, rallied from a 16-7 deficit in the second quarter with a 10-point outburst in the fourth quarter. Massimo Biscardi hit a go-ahead 34-yard field goal before Rogers connected on a 22-yard touchdown pass to Rara Thomas to build the 24-16 lead with 7:58 remaining.

Ole Miss’ touchdown drive came after a bizarre exchange of fumbles. The Rebels’ Jonathan Mingo fumbled a lateral at the Ole Miss 30-yard line with 7:15 to go. The play was initially blown dead as an incomplete pass, then ruled a fumble following a replay review. Mississippi State linebacker Jett Johnson had picked up the loose football and the Bulldogs were awarded possession.

“So, very discouraging and a lot of things went wrong. You have the whistle that we stop, which is what you coach players to do, because you’re supposed to stop when there is a whistle,” Ole Miss coach Lane Kiffin said. “Everyone else stopped for the inadvertent whistle, but one of their guys didn’t so he was right. So now we are supposed to teach, when there is a whistle.”

Mississippi State moved to the 1-yard line two plays later with a 24-yard run by Dillon Johnson. It missed a chance to put the game away, however, when Rogers fumbled on a quarterback run with 4:48 to go.

Rogers finished 27-of-39 passing for 239 yards, converting 8 of 16 on third down. Jo’quavious Marks led the Bulldogs with 74 rushing yard on 14 carries, including a 1-yard touchdown.

Dart was 30-of-38 passing for 250 yards and two touchdowns, including a 2-yard touchdown to J.J. Pegues in the second quarter. Ole Miss was limited to a season-low 331 total yards. Quinshon Judkins had 87 yards on 21 rushes, but the Rebels finished with 74 rushing yards after two sacks.

The build up to the Egg Bowl was dominated by conflicting reports whether Kiffin will leave to become head coach at Auburn, replacing Bryan Harsin, who was fired in October.

Kiffin met privately with his team Wednesday confirming his plans to remain. However, WCBI-TV of Columbus reported Kiffin will be announced as the Auburn head coach as soon as Friday. Kiffin denied the report on social media Wednesday.

When asked in the postgame press conference if he planned on being the head coach at Ole Miss next season, Kiffin simply said, “Yes I do.”

Trailing 16-7 with 1:55 remaining in the first half, Mississippi State responded with a 12-play, 75-yard touchdown drive, capped by a 19-yard pass from Rogers to Lideatrick Griffin, with 8 seconds remaining.

Rogers was 8 of 10 passing for 66 yards in the drive, converting twice on third-down situations to pull the Bulldogs within 16-14 at halftime, setting up 10 unanswered points in the fourth quarter for a 24-16 lead that proved decisive.

“That was big. We struggled in the first half but mentally that drive helped us fight our way out of it,” Leach said. “The drive did a really good job of setting the stage for what we did in the second half.”

Ole Miss started the season 7-0 and got as high as No. 7 in the Associated Press Top 25 poll. It finished by losing four of its last five games — two of them at home by a total of eight points — and will likely drop out of the Top 25 for the first time in 29 weeks.

The loss for No. 20 Ole Miss jeopardizes a 29-week streak of holding a slot in the AP Poll. The Rebels advanced to No. 7 before losing four of the final five games.

“Really disappointed for our players, especially our seniors. To finish like this, with a chance to win three in a row, I really don’t think we did a really good job coaching in games and adjustments,” Kiffin said.