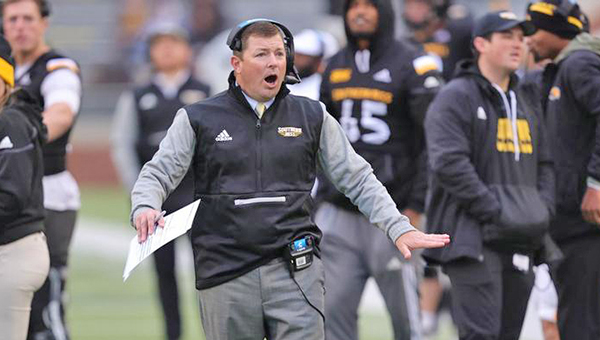 Southern Miss football head coach Will Hall wants to get his program to a championship level, but is well aware that it’s a long road to get there.

The Golden Eagles can hit a major checkpoint, though, by winning their regular-season finale Saturday afternoon against Louisiana-Monroe.

A win would would be Southern Miss’ sixth of the season, which would qualify it for a bowl. It’d be a major achievement, Hall said, for a team that struggled to put together a full roster just last season.

“When we came here, everyone said ‘Coach, how quick do you want to win a championship?’ The first step for us as a program is to play 12 games that matter again. We haven’t done that in a long time here and now we have done it. We are on game 12, and the 11th game mattered, the 10th game mattered, the ninth game mattered, and this 12th game sure matters,” Hall said during a press conference earlier this week. “That is a great step forward in our program to get to game 12 and for that game to matter. That is huge for us and we are obviously excited to get to that point, but we need to get over this hump and win.”

Southern Miss (5-6, 3-4 Sun Belt Conference) has already had three chances for win No. 6, and whiffed each time. Consecutive losses to Georgia State, Coastal Carolina and South Alabama ­— the last two by a total of 10 poins — put the Golden Eagles into a do-or-die situation against Louisiana-Monroe (4-7, 3-4).

Hall said losing close games — and learning how to eventually win them — is part of the program’s evolution.

Getting to play in a bowl game, Hall added, would be another major step — and not just for the prestige of it.

Teams that are bowl-eligible can conduct two weeks of practice in December, and Hall said the extra work would help his young roster.

“We have 71 freshmen and sophomores. You don’t have to spend a lot of time explaining it. It is just more practice for young kids,” Hall said.