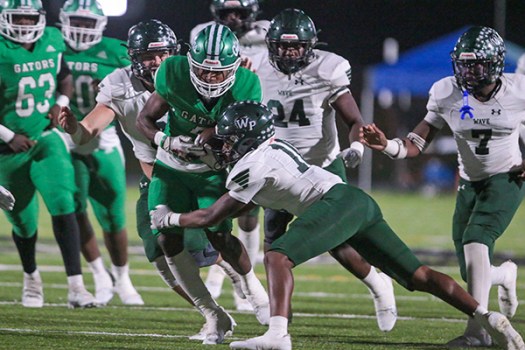 Vicksburg High running back Johnny Smith is hit by West Point Bryson Wells during the MHSAA Class 5A North State championship game Friday at Memorial Stadium. Smith led the Gators with 81 rushing yards on 11 carries, but they lost 14-0. (Walter Frazier/For The Vicksburg Post) 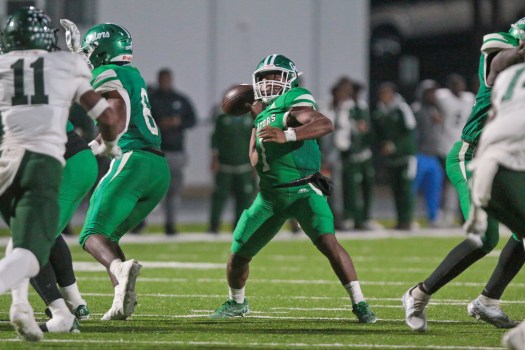 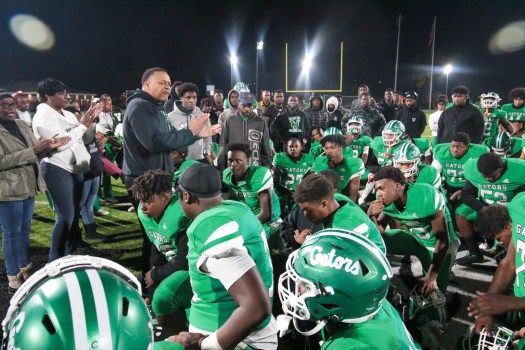 Vicksburg High football head coach Todd McDaniel talks to his team after their 14-0 loss to West Point in the MHSAA Class 5A NOrth State championship game on Friday. (Walter Frazier/For The Vicksburg Post)

The distance between Vicksburg High and a dream come true was the last few yards in front of the end zone.

It’s the same space West Point has owned and defended for seven years now, and counting.

Vicksburg failed to score on five trips inside West Point territory ­— four of those were inside the 20-yard line — and couldn’t get past one of Mississippi high school football’s most dominant teams, losing 14-0 in the MHSAA Class 5A semifinals on Friday night.

“Offensively, we moved the ball up and down the field. When you don’t get anything out of it, when you don’t cross the goal line you tend to lose those types of games,” Vicksburg coach Todd McDaniel said. “That’s championship football. You’ve got to get something out of those.”

West Point (11-2) won the Class 5A North State championship for the seventh consecutive season. It will take on Picayune — a 49-14 winner vs. Gautier in the South State final on Friday —in the state championship game on Dec. 2 at 7 p.m, at Southern Miss’ M.M. Roberts Stadium in Hattiesburg.

West Point’s seven straight championship game appearances are the second-most in the MHSAA’s playoff era that started in 1981. South Panola went nine times in a row from 2002-10.

“It’s been motivation through the whole offseason. You have a great season and have a bad taste in your mouth,” West Point coach Chris Chambless said of the rematch with Picayune. “That’s what happened last year. We were able to get back and we’re going to prepare the best we can and go give them our best shot.”

Vicksburg (10-3), meanwhile, was left with a great season that came up one game short of the school’s first championship game berth in the MHSAA’s playoff era. It won a state title as a member of the old Big 8 Conference in 1973.

The Gators won 10 games in a row — their longest winning streak since 1993 — and their first region championship since 1990. They reached the playoff semfinals for the first time since 2001.

It was all a small consolation in the immediate aftermath of Friday’s semifinal loss, but McDaniel said there was plenty to be proud of about this team’s journey.

“I’m extremely happy for the kids. I’m proud of the kids. They did a great job. They had 10 straight wins. Not many people can say that,” McDaniel said. “But we’re trying to get to the point where we have 10 or 11 wins every year. That’s our goal. Getting back to this point next year and possibly taking that next step is what we’re shooting for.”

Vicksburg outgained West Point 249 yards to 215, but was playing from behind right from the opening kickoff.

DeCorey Knight tried to field a bouncing ball at his own 20, bobbled it while running, and then lost it when he ran into a wall of defenders and blockers at the 25.

West Point’s Branson Rainey scooped it up and returned it 25 yards for a touchdown, then Kahnen Daniels ran in the two-point conversion to put West Point ahead 8-0 just 11 seconds into the game.

“I was over there talking to somebody on the sideline and I didn’t even get to see it,” Chambless said. “It’s just called hustle.”

West Point’s only other touchdown came on the opening possession of the second half. It accelerated the tempo and put the Gators back on their heels. A 12-play, four-minute drive was capped by a 7-yard touchdown run by Keshawn Henley that made it 14-0 with 7:58 left in the third quarter. The two-point try was no good.

It was the only time on six offensive possessions that the Green Wave got inside Vicksburg’s 25-yard line.

“We prepared for it,” McDaniel said of West Point’s sudden shift to a faster-paced attack. “But they hit us right where we knew we were going to be vulnerable. We knew they were an off tackle team and we prepared to stop the off tackle stuff and give them the illusion that we were stacked up in the middle like most people do. It worked besides that one drive.”

Vicksburg’s offense worked all night, until it got deep inside West Point territory.

The Gators reached the 10-yard line on their opening possession, after Rainey’s fumble return, before stalling out and turning it over on downs. Their second drive got to the 3-yard line and then Johnny Smith was stopped for a short gain on fourth-and-goal.

In the second half, the Gators got as far as the 20, the 21 and the 11 on three possessions and couldn’t punch it into the end zone on any of them.

“We work on those situations every day in practice, and I think that’s helped us with that mentality of being tough when you’ve got to be,” Chambless said. “They forced us into situations where we had to toughen up and make plays, and our defense was able to do that.”

For West Point, Daniels needed 24 carries to get his game-high 87 yards, while Devin Jones had 61 yards and Henley finished with 34 to go along with his touchdown.

It was a defensive slugfest on both sides, and the reigning heavyweight champion in the North half of the Class 5A bracket defended its title.

Going toe-to-toe with them for 12 rounds was a big step for Vicksburg. It is only two years removed from a 4-8 season and was blown out 42-6 by West Point in the second round of the 2021 playoffs. McDaniel said he just wanted the Gators to take a little bit bigger step.

“It’s definitely something positive, but if you don’t take away the win …,” McDaniel said, trailing off on his thought. “But it’s something to build off of. We’ve just got to get back in and dust ourself off.”