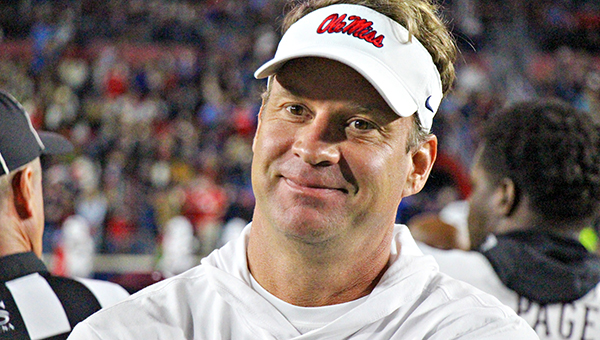 Ole Miss football head coach Lane Kiffin announced Saturday that he will stay at Ole Miss, ending several weeks of speculation that he was a leading candidate to leave and take over Auburn's program. (Walter Frazier/For The Vicksburg Post)

OXFORD (AP) — Lane Kiffin says he has informed school officials he will be staying at Ole Miss, putting an end to speculation that he was the leading candidate to fill the football head coaching vacancy at Auburn.

“Same as I said last week: I’m staying here and we have a lot of work left to do,” Kiffin told The Associated Press on Saturday in a voice message.

Kiffin added he has not signed a contract extension with the school.

The 47-year-old Kiffin is 23-12 in three seasons as Rebels coach. No. 20 Ole Miss finished its regular season 8-4, losing four of its last five, including Thursday’s 24-22 loss to Mississippi State.

Kiffin had refuted media reports leading up to the Egg Bowl about his interest in the Auburn job — including one report from WCBI-TV in Columbus that he had all but been hired — yet it did little to tamp down the rumor mill until his comments Saturday.

“I’m extremely happy here. Like we just talked about, the difference in where this program is now compared to three years ago. We feel that we have really good support. I can get up here and give you, whatever it was, the ‘pine box’ speech, ‘I’m not going to be the next head coach at Alabama,’” Kiffin said Monday, referencing the remarks Tommy Tuberville made at Ole Miss in 1998 before leaving to become Auburn’s coach two days later.

“I can give you those things. I don’t know what those mean. I don’t know what else to say,” Kiffin added. “Been here three years and been fortunate enough, I guess now I have three different contracts. So I don’t know why all of a sudden a fourth contract makes people feel better. Like I said, we’re very appreciative of everything here.”

When asked in the postgame press conference if he planned to remain at Ole Miss, Kiffin also said, “Yes I do.”

Auburn was playing Saturday at No. 8 Alabama in the Iron Bowl, and its coaching search figured to heat up soon after its season concluded.

Auburn fired coach Bryan Harsin earlier this month and has gone 2-1 since under interim coach Carnell Williams, the former star running back for the Tigers.

With Kiffin off the market, Auburn is eyeing a former Ole Miss coach to be its next coach.

A person familiar with the search told the AP that Auburn is interested in Liberty’s Hugh Freeze. The person spoke to the AP on condition of anonymity Saturday because Auburn was not making details of its search public.

After Liberty lost 49-14 at home to New Mexico State on Saturday, Freeze did not hide his interest in a possible return to the Southeastern Conference.

“I’ve communicated with (Liberty athletic director) Ian (McCaw) that if someone ever wanted to talk to us that interests us, I would always tell him. Is the job that everyone’s talking about one that I would have an interest in of talking with? Sure,” Freeze told reporters after the game. “That doesn’t mean they have offered me a job. Who knows where that’s headed.”

Freeze coached at Ole Miss for five seasons before leaving in disgrace in 2017 after the school discovered he used a university cellphone to call an escort service.

He has gone 34-14 in four seasons with the Flames. They finished 8-4 this year, including a road win at SEC member Arkansas.

“I’ve always said I love being here on the Mountain, I’m happy here, but I’m not going to sit and say to our kids or somebody that’s just absolutely false, there’s no interest in it,” Freeze said. “The part that’s false is there’s been no offer made to me, nor have I accepted anything. I think that’s what our kids came in the locker room kind of feeling.”