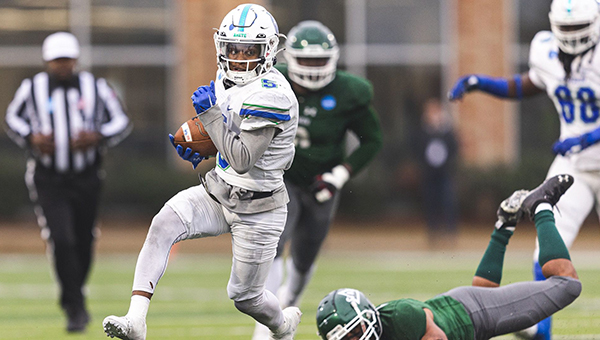 West Florida running back Shomari Mason (5) carries the football during the Argos' 38-27 win over Delta State in the NCAA Division II playoffs on Saturday. (Morgan Givens/University of West Florida)

CLEVELAND — Like a lot of memorable disasters, Delta State was in complete control of its playoff game against West Florida right up until it wasn’t.

West Florida scored 28 points in the fourth quarter to overcome a two-touchdown deficit, and beat a stunned Delta State 38-27 in the second round of the NCAA Division II football playoffs on Saturday.

Peewee Jarrett was just 9-of-21 passing for West Florida (11-1), but threw for 161 yards and two touchdowns. His 35-yard TD to Jakobe Quillen on the first play of the fourth quarter started the Argos’ surge and the Statesmen’s collapse.

Shomari Mason also scored a touchdown in the fourth quarter, on a 3-yard run with 9:48 left, and finished with 120 yards. C.J. Wilson added 85 yards and a TD — a 1-yard run with 30 seconds left that turned out to be the game-winner.

This was the third straight comeback for West Florida against its Gulf South Conference rival Delta State (11-2). In 2021, it erased most of a 20-point halftime deficit but lost 39-31. In the regular season this year, the Argos overcame a 14-point deficit in the fourth quarter before losing 45-42 in overtime.

This time they got over the hump and advanced to play Wingate (11-2) in the quarterfinals on Dec. 3.

“I thought our offensive line really started to wear on their defense in the fourth quarter,” West Florida coach Pete Shinnick said. “When you can throw three running backs the way we do … Shomari (Mason) can tell you, he’s fresh and a 1,000-yard rusher averaging eight yards a carry.”

Delta State quarterback Patrick Shegog only completed 12 of 22 passes for 154 yards, but ran for 78 yards and three touchdowns. His 3-yard TD with 3:09 left in the third quarter put Delta State ahead 24-10.

Delta State did not find the end zone again, however. Its last points came on a 20-yard field goal by Nick Herber with 4:10 left. That came after the touchdowns by Quillen and Mason had tied it, and put Delta State back in front 27-24.

The Argos responded, though, with a 10-play, 75-yard drive to win it. Wilson’s 1-yard touchdown run with 30 seconds remaining put them ahead 31-27.

The Argos then iced it on the next play from scrimmage. Shegog was intercepted by Anthony Johnson, who returned it 39 yards for a touchdown.

Delta State had 315 rushing yards as a team. Alfonso Franklin had a team-high 121 and Kelvin Smith had 107. West Florida had 336 rushing yards, including 55 on its game-winning drive.