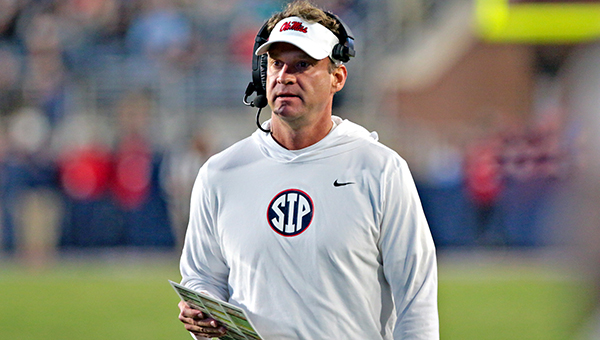 OXFORD (AP) — The Lane Train is, officially, staying in Oxford for a little while longer.

Ole Miss announced Tuesday that Lane Kiffin has signed a new contract to remain in place as the school’s football head coach.

Details of the deal were not released. The 47-year-old Kiffin has gone 23-12 in three seasons with the Rebels, who lost four of their last five games to finish the regular season at 8-4.

Ole Miss had its first 10-win regular season in 2021 and is headed to a bowl game for the third straight year.

“Coach Kiffin is establishing a program that can sustain success and contend for championships,” Keith Carter, the school’s vice chancellor for intercollegiate athletics, said in a statement. “We are investing in our football program like never before.”

Carter cited a “greatly increased salary pool for assistant coaches and support staff,” a $45 million renovation of the Manning center and “tremendous momentum in NIL.”

“We will continue to equip Coach Kiffin with these and the other resources necessary to compete and win at the highest level and build on the accomplishments of the last three seasons,” he said.

Kiffin was regarded as a top candidate for the job at Auburn, which hired Hugh Freeze from Liberty on Monday. Some media reports last week said Kiffin was set to leave Ole Miss as soon as its season ended, but he repeatedly denied them.

Kiffin informed his team at a meeting last week, before the regular-seasion finale vs. Mississippi State, that he would be staying at Ole Miss.

The Rebels have gone over 600 total yards in 20 games under Kiffin, something Ole Miss teams had only done 16 times before his arrival.

The Rebels rank in the top 10 nationally in eight different offensive categories, including rushing yards, touchdowns and total yards.

“With the support from our collective and a new state-of-the-art facility, we will be able to build off what we have achieved so far and offer more opportunities to our student-athletes,” Kiffin said in a statement.