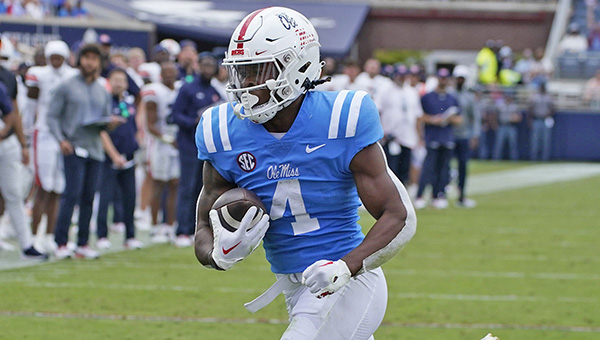 JACKSON — A freshman with fresh legs ran off with Mississippi’s top football award.

It’s the third consecutive year that an Ole Miss player has won the Conerly Trophy. Wide receiver Elijah Moore and quarterback Matt Corral won it in 2020 and 2021, respectively. Either an Ole Miss or Mississippi State player has won it every year since 2012, and 20 of the 27 years it has been awarded since its inception in 1996.

The Alabama native anchors an Ole Miss rushing attack that that leads the SEC and ranks No. 3 nationally in rushing yards per game (261.6 ypg).

With a bowl game still yet to be played, Ole Miss has already broken its single-season school record in rushing yards (3,139), previously set in 1957.

Judkins is having one of the greatest seasons ever by an SEC freshman running back. He currently ranks third all-time amongst conference freshmen in rushing yards, behind only Herschel Walker (1,616 yards, Georgia, 1980) and Nick Chubb (1,547 yards, Georgia, 2014).