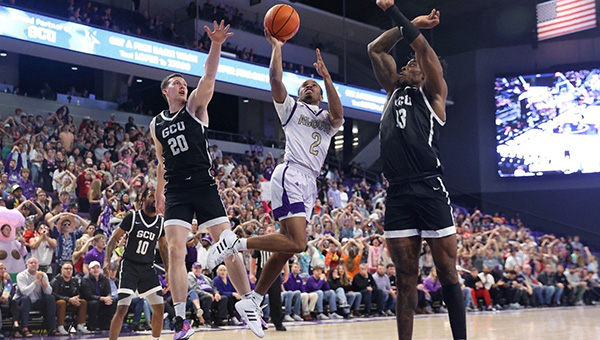 PHOENIX — Alcorn State’s men’s basketball team mounted a historic comeback Tuesday, but couldn’t quite finish it and get their name in the record books.

The Braves erased all of a 30-point deficit against Grand Canyon, then faded down the stretch and lost 80-72.

A 24-10 run to close the half got the Braves back in it, and they kept it up after the break. Ladarius Marshall threw down a power dunk, and then Byron Joshua made a 3-pointer that trimmed the deficit to seven with 14:52 left.

Another 10-2 run later in the half was capped by two free throws from Byron that tied it at 63 with 7:29 to go.
The Braves never got the lead, though. Yvan Ouedraogo made four free throws on Grand Canyon’s next two possessions and Ray Harrison drilled a 3-pointer to put the Lopes ahead 70-63 a minute later. They maintained that lead the rest of the way.

Had Alcorn succeeded in completing the comeback, it would have been the biggest since Drexel’s NCAA record 34-point swing in 2018, and would have registered as the fourth-biggest deficit overcome in NCAA history.

“For 13 minutes, we were unbelievable building a 30-point lead. You don’t imagine that that’s going to evaporate in the next 20 minutes, but it did,” Grand Canyon coach Bryce Drew said. “I really credit our guys for being resilient there in the last five, six minutes.”

Harrison scored 18 points for Grand Canyon and Ouedraogo had 10. Jovan Blacksher led the Lopes with 21 points.

Joshua went 5-for-5 from 3-point range for Alcorn and finished with a game-high 30 points. Jeremiah Kendall and Dekedran Thorn scored 14 apiece, and Kendall also had eight rebounds.

The close game was the latest in a string of strong showings for Alcorn State early this season. The Braves have already notched road wins at Wichita State and Stephen F. Austin, a neutral-court win vs. Cal State Bakersfield, and lost in double overtime at UTEP.

They’ll go back on the road this weekend to play No. 13 Tennessee, Sunday at 5 p.m.