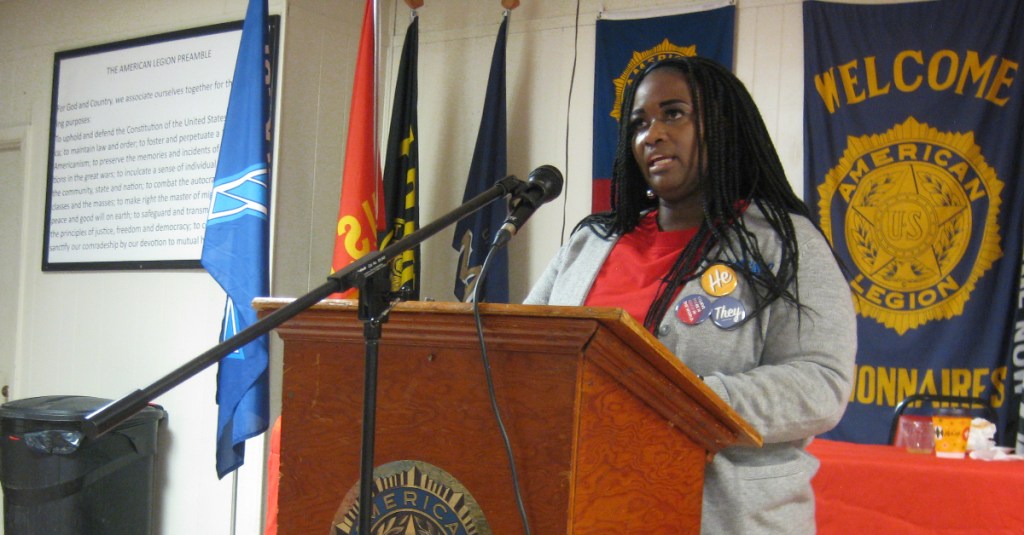 Kimberly Stevens discusses the need to end the stigma of AIDS and the disease at a World AIDS Breakfast Thursday at the Tyner Ford American Legion Post 213. (Photo by John Surratt | The Vicksburg Post)

About 20 people gathered at American Legion Tyner Ford Post 213 Thursday to remember an illness that has as taken lives across the world and were asked to end the stigma of AIDS and work to eliminate the disease.

Speaking during a World AIDS Day breakfast at the post, Kimberly Stevens, executive director of GAP Ministries, said World AIDS Day “Is not for us more so to mourn those who have passed from AIDS or HIV, but to provide education to our community. Mississippi is the No. 1 state for HIV.”

The Southern states, she said, have the highest rate of HIV in the nation.

In 2020, according to information from the Centers for Disease Control, the southern region of the United States led the nation in the number of new HIV diagnoses with 15,689 cases. African Americans accounted for 52 percent of those diagnoses. The closest region to the South, according to the CDC, was the West, with 6,316 cases.

Stevens said that when she planned her program, she looked for local and regional organizations to help HIV patients and inform the public about the disease.

“I couldn’t find any organization in Vicksburg that focuses on HIV and AIDS and I found that very sad,” she said. “I think that as a community, we have to do much better. We must stop the stigma.”

World AIDS Day began in 1988 to promote sharing of information about the disease between local, state, national and international organizations and individuals.

According to the World Health Organization, 38.4 million people worldwide were living with HIV as of 2021 and 650,000 people died from HIV-related diseases.