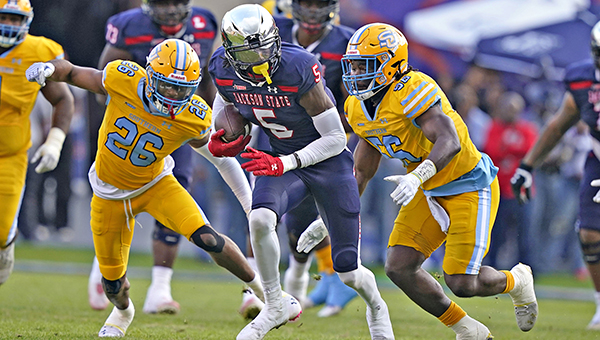 JACKSON (AP) —If Coach Prime is on his way out at Jackson State, then the Tigers sent him out on top.

Now the big question for JSU is whether or not it was Deion Sanders’ final game as the school’s coach.

Reports swirled before the game that Sanders would announce his departure from the FCS program after three seasons to become head coach at Colorado. Sanders acknowledged an offer from the school earlier this week and added that he had talked to other FBS programs about vacancies. Colorado’s board of regents called a special meeting for Sunday but hasn’t commented on any candidates taking over the Buffaloes.

Neither Sanders nor JSU spoke to reporters afterward. A SWAC spokesman said the team had left Veterans Memorial Stadium and returned to campus for a team meeting.

In an on-field interview played over JSU’s home field public address system, Sanders referred to JSU’s upcoming Celebration Bowl appearance and said, “We still have one more to go, and we will finish.”

The Tigers advanced to the Celebration Bowl, the championship for historically Black college football, on Dec. 17 in Atlanta against Mid-Eastern Athletic Conference champion North Carolina Central.

The Tigers’ victory improved Sanders to 27-5 as coach of the FCS program and came days after he was named SWAC Coach of the Year for the second consecutive season.

Jackson State (12-0) quashed any questions about Sanders’ future being a distraction by completing the first unbeaten regular season in school history and claiming its second consecutive SWAC championship. The Tigers’ top-ranked defense set the tone by quickly pouncing on the Jaguars for three turnovers in eight plays in the first quarter.

Sanders, the SWAC’s Offensive Player of the Year, completed 31 of 44 passes for 305 yards. Hooks caught five passes for 98 yards and Wilkerson rushed 15 times for 61 yards.

McDaniel was 15-of-34 passing for 220 yards and a touchdown for Southern. Former Warren Central star Joshua Griffin kicked a 39-yard field goal and was 3-for-3 on PATs.