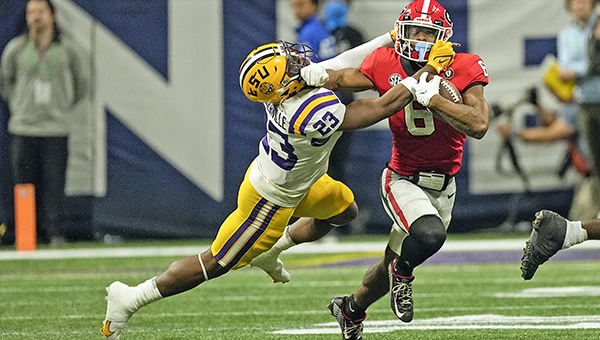 LSU linebacker Micah Baskerville (23) drags Georgia running back Kenny McIntosh (6) down in the second half of the Southeastern Conference championship game on Saturday. No. 1 Georgia beat LSU 50-30. (AP Photo/John Bazemore)

ATLANTA (AP) — Georgia swatted away the field goal attempt, the ball spinning to a stop at its 4-yard line. The LSU players trudged off the field, thinking the play was over.

Christopher Smith knew better. He suddenly scooped it up and took off the other way, sprinting 96 yards for a touchdown that epitomized the Bulldogs program.

They were a step ahead of LSU on Saturday.

They’ve been a step ahead of everyone for two years now.

With all sorts of turmoil behind them in the rankings, Georgia headed to the College Football Playoff as the clear No. 1, dismantling the No. 11 Tigers 50-30 in the Southeastern Conference championship game Saturday.

“I’ve got good players around me. I’m not that bad at football, either,” Bennett said with a smile. “We’ve got a good team.”

Georgia (13-0, No. 1 CFP) also caught a big break when Smith deflected a pass that bounced off an LSU receiver’s helmet and wound up being picked off by the Bulldogs, setting up a score that contributed to a 35-10 lead by halftime.

LSU quarterback Jayden Daniels re-injured a sore right ankle late in the second quarter, giving way to Garrett Nussmeier in the second half.

The backup guided the Tigers (9-4, No. 14 CFP) to three second-half touchdowns, but it wasn’t nearly enough.

“I don’t want one kid to walk out of our program without an SEC championship ring in their careers,” coach Kirby Smart said. “That could’ve happened. They said enough is enough and got ’em one tonight.”

Georgia heads into the playoff assured of a return trip to Atlanta for a de facto semifinal home game at Mercedes-Benz Stadium, just 75 miles from its Athens campus.

LSU’s outside hopes of crashing the four-team playoff field were wiped out a week ago by a stunning loss at Texas A&M, one of several upsets that will give the selection committee plenty to think about before its announcement Sunday.

Tennessee and Clemson also ruined their playoff hopes with losses late in the regular season, while No. 4 Southern California is presumably out after getting blown out by Utah in the Pac-12 title game Friday night.

Just as the SEC game was kicking off, No. 3 TCU lost to Kansas State in overtime for the Big 12 championship, further clouding a playoff picture that suddenly looks much more favorable for No. 5 Ohio State and No. 6 Alabama.

No matter who makes the elite field, Georgia is firmly focused on becoming the first repeat national champion since Alabama in 2011-12, having won all but one game this season by double-digit margins.

“I’ve tried not to pay attention to any of it,” Smart said of all the chaos. “It didn’t matter to me. That’s so far away.”

The Bulldogs showed they are more than just a bunch of talented athletes — this is a smart, well-coached group.

When Nazir Stackhouse burst through the middle of the line to block LSU’s 32-yard field goal attempt late in the first quarter, Smith knew what to do.

“That’s a scenario we go over a lot in practice,” he said.

He looked toward the sideline to see if it was OK to grab it.

“You’re not allowed to pick it up unless you can score with it,” Smart said.

Smith took care of the rest.

LSU coach Brian Kelly blamed himself and his staff for allowing the play to happen.

“Obviously, we did a poor job of coaching,” he said. “It’s our responsibility to have our guys alert in that situation. They were not alert.”

LSU quickly tied it up on Daniels’ 53-yard touchdown pass to Kayshon Boutte, only to have Bennett take control from there.

The sixth-year senior, a former walk-on who was offensive MVP of both Georgia playoffs wins a year ago, struck for four TD passes in a less than 15-minute span: 3 yards to Brock Bowers, 22 yards to Ladd McConkey, 14 yards to Darnell Washington and 3 yards to Dillon Bell.

When Georgia scored its final touchdown early in the fourth quarter for a 48-23 lead, Smart surprisingly called for a two-point conversion.

The Bulldogs converted it with a trick play, but Smart insisted that he wasn’t trying to run up the score.

“The books says you go for two there,” he said.

When asked about the play, Kelly stumbled over his words a bit before finally saying, “I don’t get too caught up in what other teams are doing.”