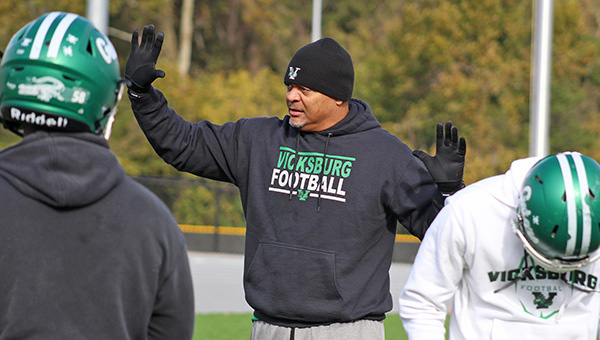 As details of the 2023 football schedules for Vicksburg High and Warren Central started to filter out this week, one big question stood out.

Why aren’t those teams playing each other at the end of the season?

Traditionally, rivalry games are either early in the season if, like for the past decade, the teams are not in the same region. Or they’re reserved for the final regular-season games if they are in the same league.

The Gators and Vikings will renew their Warren County blood feud on Oct. 13, 2023. That’s Week 8 of the regular season, and Week 2 of the Region 2-6A schedule.

The reason why, Vicksburg coach Todd McDaniel said, was simple. Each six-team region in the MHSAA has its schedules literally pulled out of a hat. Whatever number a team draws, they are assigned the corresponding schedule from a template.

“A lot of people asked why we’re playing Warren Central then. We have no control over that. When we reach in a hat we don’t know what number we’re going to grab,” McDaniel said. “Other schools have things going on with their schools and districts too, so what number you pull that’s what it is. It would be perfect if we pulled one and six and those play at the end of the year, but we didn’t pull that. We landed in the middle of the conference schedule.”

The schedule draw is one of many intricacies of a system that is a lot more complicated than it looks on the surface. Scheduling 10 football games is a process that can take months and has dozens of moving parts that need to fit into place just right before the list can be printed on a cool-looking graphic or poster.

First, teams have to want to play each other. One team that improves a lot might have a hard time getting one that’s in a down cycle to agree to a game. McDaniel, whose Gators have gone from a 4-8 record in 2020 to a 10-3 mark in 2022, has found that out the past few months.

“You may have four or five you talk to, but when it’s time to lock the games in three or four of them may say they’ve got something else,” he said with a laugh. “That’s part of it. Then you have to go scrambling and find somebody else.”

Even when two teams want to play each other, it’s not as easy as wishing it into existence.

For example, Vicksburg’s schedule the past two seasons had 11 playing dates. Eight were region games, one was reserved for the Red Carpet Bowl, and another for Warren Central. Its open date was in late October, when every other team in Mississippi is deep into its own region schedule and not available.

Warren Central had a bit more flexibility, but still only had one playing date available. That led to long-running series vs. Clinton and Madison Central going on hiatus in 2021 and 2022, although both will be revived in 2023.

Every team in Mississippi deals with the same issue, so finding compatible playing dates is a huge challenge. Several people in the MHSAA office help as schedule brokers, mixing and matching teams who need help finding opponents for specific dates, but it can still be a chore.

“There are a lot of schools that would be willing to play, but the dates just wouldn’t coincide. For example, I need a Week 2 and somebody else needs a Week 5 and it just wouldn’t work out,” McDaniel said. “It’s a lot of that that goes on, and that’s why you try to start it in the summer.”

And then, some time in December, it all clicks into place. One of the few offseason events as exciting as this football season is talking about the next one, and schedule release day is a perfect opportunity to do it. It’s the start of thinking about next year and pondering the unlimited possibilities that lay ahead — even if we have to wait another nine months for it to come to fruition.

“It’s fun and a headache. Some schools will answer and some won’t. Fortunately, we were able to put together a decent schedule,” McDaniel said. “But it’s the fun part of coaching, being able to get your non-district games together. That’s always fun.”