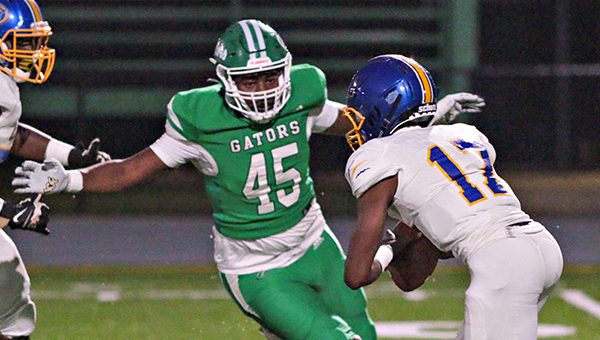 Vicksburg High defensive lineman Caleb Bryant (45) was one of four Gators selected to the Mississippi Association of Coaches Class 5A All-State first team. Bryant will also play in the Mississippi-Alabama All-Star Game Saturday in Mobile. (Walter Frazier/For The Vicksburg Post)

Mississippi’s football awards season is bringing just as much attention to Vicksburg High’s program as its outstanding regular season did.

Four Gators — running back Malik Montgomery, defensive end Caleb Bryant, and defensive backs Jeleel Fleming and J.D. Kelly — were selected to the Mississippi Association of Coaches Class 5A All-State team released over the weekend. All four players were on the first team.

Bryant and Fleming, as well as head coach Todd McDaniel, will also participate in the prestigious Mississippi-Alabama All-Star Game Dec. 10 in Mobile. The all-star game will be played at Hancock Whitney Stadium on the campus of the University of South Alabama, and will have a noon kickoff.

Kelly was also selected for the Mississippi roster, but will not play because of an injury.

Montgomery was one of three Vicksburg running backs who rushed for 970 yards or more. He led the team with 1,141 yards and 17 touchdowns, both tops in Warren County.

Montgomery also was the Region 2-5A Offensive Player of the Year.

The Gators finished 10-3 and reached the Class 5A semifinals, accomplishing both feats for the first time since 2001. They won their first region championship since 1990.

The other All-State selections came from a dominant defense that allowed just 10.8 points per game.
Bryant, Fleming and Kelly are all coveted Division I prospect with scholarship offers from more than a dozen programs each.

Bryant racked up 72 tackles despite missing several games. He had eight sacks and tied for the team lead with 24 tackles for loss.

Fleming had 40 tackles and three interceptions, including a 109-yard touchdown return in a win over Jim Hill in September.

Kelly only had 26 tackles, broke up a team-best seven passes, and was an outstanding part of a secondary that had 13 total interceptions.