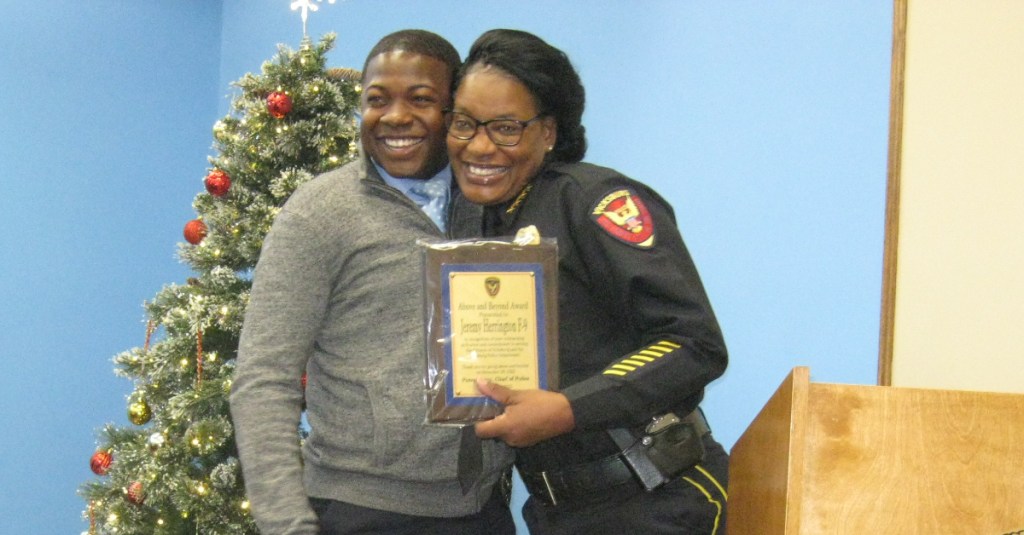 Vicksburg police officer Jeremy Herrington receives a hug and a plaque from Police Chief Penny Jones at Monday's meeting of the Board of Mayor and Aldermen. Herrington was honored for helping a flooded neighborhood. (Photo by John Surratt)

Vicksburg police officer Jeremy Herrington took the motto “Protect and Serve” to a higher level last week when he helped the residents in one neighborhood during bad weather.

His actions were a simple response to the residents’ problem and it resulted in his recognition by Police Chief Penny Jones at Monday’s meeting of the Board of Mayor and Aldermen.

“Last week we had a lot of rain in the city and in one of the neighborhoods the streets were flooded — there was no way you could drive a car through the neighborhood,” Jones said.

Herrington, she said, got out of his car, rolled up his pants legs, took his shoes off and went through the neighborhood, removing the leaves from the gutters so people could drive through the area.

“It may be something small, but it’s big,” Jones said. “He didn’t have to do that; he could have sat there with his blue lights on and waited on someone to come in and do it, but people were standing in their yards; they were very afraid because they didn’t know if the water was going to go into their houses. So he got out and did his job and I appreciate that. For that, I honor him today.”