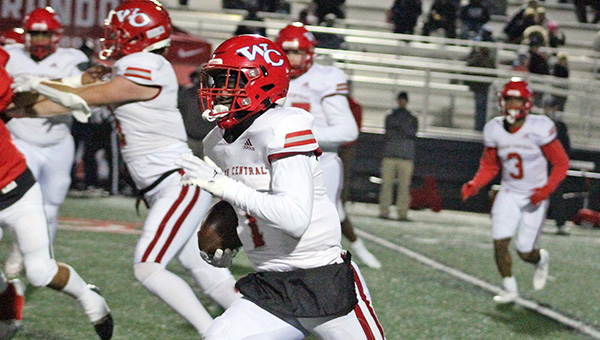 Warren Central’s Trey Hall was No. 1 in your programs, and No. 1 on quite a few lists of postseason accolades.

The Warren Central running back was named to the Mississippi Association of Coaches Class 6A All-State first team released over the weekend, and also as the Region 3-6A Athlete of the Year.

Hall will play in the Bernard Blackwell Mississippi All-Star Game on Dec. 17 in Gulfport, as well.

“It’s great that somebody recognized me that I’m an all-star player,” Hall said.

The three-year starter set Warren Central’s school record for career receptions with 88. He finished his high school career with 3,122 all-purpose yards — 1,834 rushing, 913 receiving, and 356 on kick returns — and 31 total touchdowns.

“He was an explosive player. In his toolbox, there’s so many different things that he can do. He was a really special player. Special ability, and a complete package,” Warren Central head coach Josh Morgan said. “You look over there and didn’t think he could go any more, and he’d look at you and tell you, ‘Give me the ball again.’ Our players fed off of it. They knew who was running behind them and he made us a really explosive offense. Maybe one of the most explosive offenses we’ve ever had. He was a key piece of that.”

While Hall was the key piece of Warren Central’s offense, he was not the only one recognized for their contributions to an excellent season for the program. Warren Central finished 10-2 and reached the second round of the Class 6A playoffs for the third year in a row, and landed 16 players were on the All-Region 3-6A team.

Junior Maddox Lynch was selected as the top tight end in Region 3-6A, linebackers Julien Demby and Ronnie Blossom, and wide receiver/defensive back Zack Evans were first-team All-Region selections.

Lynch caught 36 passes for a team-high 553 yards and two touchdowns to serve as a key receiving threat on an offense that averaged 30.8 points per game and had nearly two dozen plays of 50 yards or more.

Evans contributed to the Vikings’ explosive offense, and was also a starter on defense. He caught 19 passes for 436 yards and three touchdowns at receiver, and at cornerback had four interceptions and two fumble recoveries.

Blossom, a sophomore, was a terror on defense. He led the Vikings with six sacks, to go along with 85 tackles. He also had an interception return touchdown in an overtime win at Oak Grove.