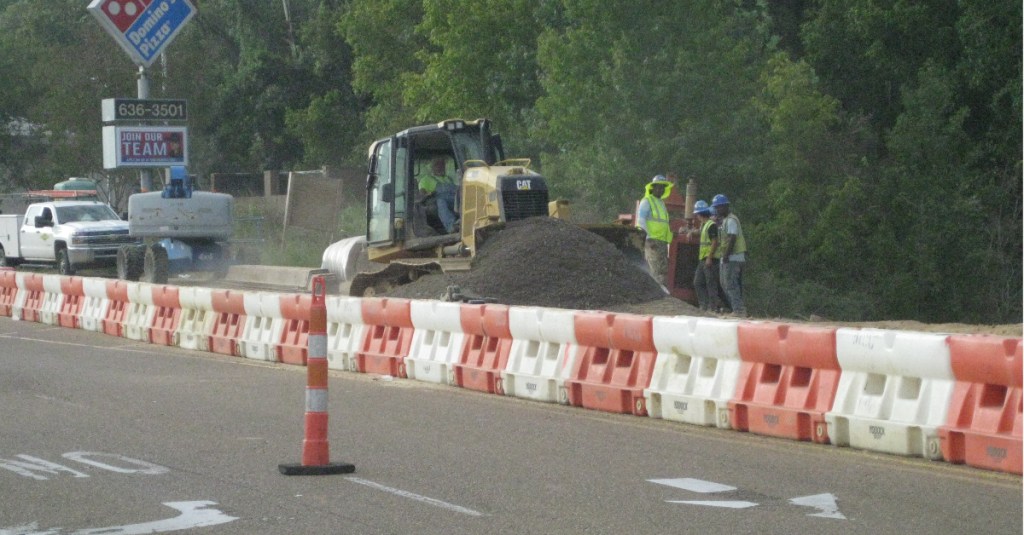 A heavy equipment operator for Hemphill Construction Co. uses a dozer to move dirt during work on Iowa Boulevard. The city hired Hemphill to shore up the shoulder of Iowa Boulevard, which was heavily damaged by erosion during heavy rains in January and April 2020. (Photo by John Surratt)

The Vicksburg Board of Mayor and Aldermen on Friday approved two invoices from Hemphill Construction Co. totaling more than $760,000 for repairs to an erosion area on Iowa Boulevard.

Florence-based Hemphill was hired after the city declared an emergency to repair the slide area, which threatened Iowa Boulevard. The payments were the final payments to the contractor on the $1.47 million project.

Public Works Director Garnet Van Norman said the contractor drove steel sheet piling into the ground, back-filled behind it and put in topsoil.

The project was one of two erosion control projects involving Iowa Boulevard. The other project involved replacing a culvert that runs under Iowa Boulevard. Van Norman said the work by Hemphill prepared the ground to install the culvert. City officials expect to advertise the installation for bids in January.

The street’s shoulder was damaged during heavy rains that hit Vicksburg and Warren County in January and April 2020, causing heavy erosion.

City officials were forced in September to reduce traffic on Iowa Boulevard near the U.S. 61 intersection to two lanes during the work.

The site was one of seven areas in the city affected by erosion problems that have been approved by FEMA for emergency grant money.

Conditions on Iowa Boulevard, however, forced the city to declare an emergency and move forward with the work. City officials used money from a $4 million loan the board made in anticipation of receiving federal emergency funds.

“What they did was just protect Iowa Boulevard,” Van Norman said. “We were about to lose Iowa Boulevard and there was a big 18-inch high-pressure gas transmission pipe at the bottom of the slope; there were all kinds of reasons we had to declare an emergency; it couldn’t wait.”