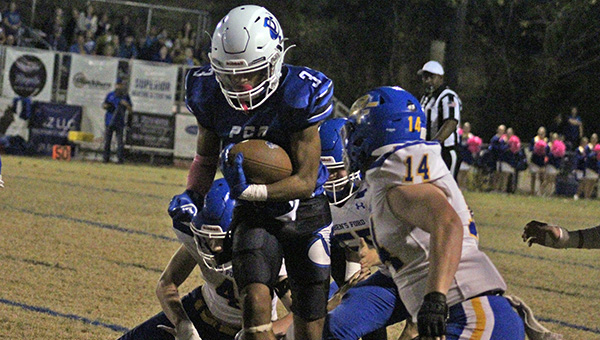 Porter's Chapel Academy running back Jase Jung (3) was one of three PCA players, and one of 10 from Vicksburg-area schools, selected to the All-MAIS teams announced Friday. (Ernest Bowker/The Vicksburg Post)

A host of Vicksburg-area football players got an early Christmas present Friday, with one last football accolade to put a bow on the 2022 season.

A total of 10 players from Vicksburg and the surrounding area — one from St. Aloysius, three from Porter’s Chapel Academy, and six from Tallulah Academy — were selected to the All-MAIS teams in their respective classifications by the Mid-South Association of Independent Schools.

St. Al’s representative on the Class 4A team was punter Jake Brister. The senior averaged 49.6 yards per punt. He had 13 punts downed inside the 20-yard line and six downed inside the 10. Brister was also selected to play in the MAIS All-Star Game earlier this month.

Porter’s Chapel Academy kicker Daniel Llopis, defensive back Jase Jung and lineman Maureon Simms all made the All-MAIS Class 2A team. Llopis was an MAIS All-Star, while the versatile sophomore Jung did a bit of everything for the Eagles.

Jung led Warren County with seven interceptions to go along with 71 tackles and two sacks. He also played running back and was PCA’s leading rusher, with 687 rushing yards and 12 touchdowns. He caught 28 passes for 344 yards.

Simms, a senior and five-year starter on PCA’s offensive and defensive lines, also played in the All-Star Game. He made the All-MAIS team as a defensive lineman. Simms totaled 48 tackles, 18 tackles for loss and five sacks.

Tallulah Academy reached the Class 2A championship game and was handsomely rewarded with six spots on the All-MAIS list.

Bedgood finished with 832 rushing yards and 13 touchdowns, while Morson had 996 yards and 18 touchdowns.
Dennis totaled 57 tackles and one sack.

All of the Tallulah players except Morson, who is only a sophomore, were selected as MAIS All-Stars.