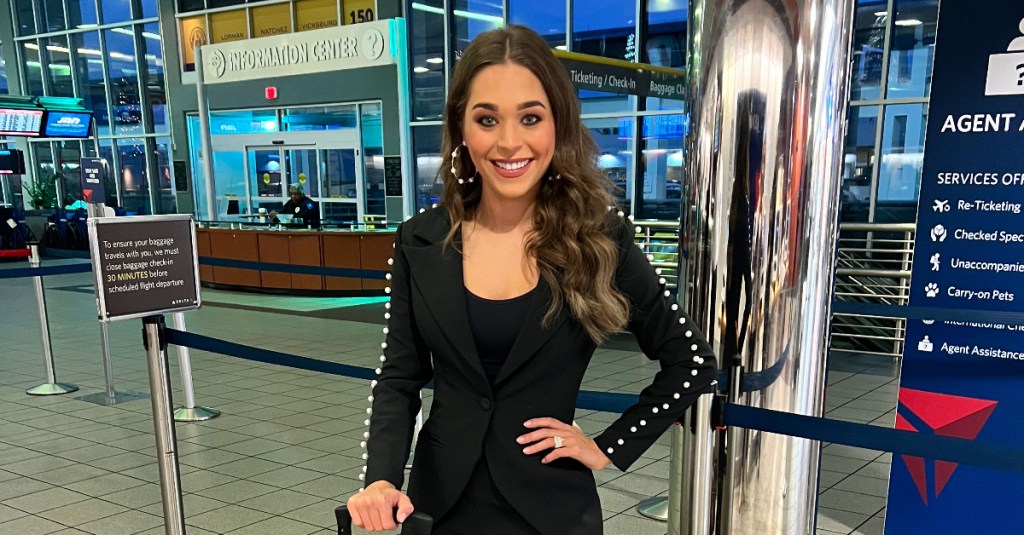 Miss Mississippi Emmie Perkins boarded a flight this past Thursday to New York City, where she and her fellow Miss America Contestants began the final road to the crown. (Photo courtesy of Emmie Perkins)

Miss Mississippi Emmie Perkins said at a Vicksburg-Warren County Chamber luncheon that she has a playlist representative of her life story.

This week, the 21-year-old Hattiesburg native will be adding to that playlist as she competes for the 2023 Miss America title, and hopefully, the song she adds to the playlist will be Bernie Wayne’s “There She Is, Miss America.”

Perkins, who represented Mississippi State University in the state competition, was crowned 2022 Miss Mississippi this past June and since then has been preparing for the Miss America Competition, which will get underway with the first round of preliminary competitions on Tuesday at the Mohegan Sun in Uncasville, Conn.

“I have been doing everything under the sun to get ready for this once-in-a-lifetime opportunity,” Perkins said. “I have performed my talent a thousand times in the garage and my family has asked me on-stage questions.”

Perkins said she has also spent time in the gym exercising, participating in mock interviews and taking voice lessons in preparation for the talent phase of the competition.

“I am excited to see all my hard work pay off,” Perkins said. “My dad says it’s always easy to be good, but it takes that extra push to be great, so that’s what I’ve given it. And right now, I feel the most peace I’ve had since this whole prep process began because the work’s over and it’s time to go live out the dream.”

Perkins will be performing a vocal number for the talent phase of the competition on Dec. 13 during the first round of preliminary competitions. She said she is not at liberty to divulge the song she will be singing, but she did say it was a song she has performed before.

“I have performed this song many, many times, so I went back to what I knew I loved and what message the country needed to hear,” she said.

Perkins is majoring in biological science and minoring in music. During her studies, she said she recognized there was a connection between the two, and as a result chose “Music is Medicine” as her Social Impact Initiative.

“I am a big believer in storytelling and overcoming battles that are in your way so when I chose my song, I knew I had to choose something I could communicate as a message to the world,” she said. “Because I truly feel like everyone deserves the opportunity to use music as a means of storytelling and as an empathetic tool to connect us all in a world that is so dark and divisive.”

And while Perkins will be performing vocally during the talent phase of the Miss America Competition, she said she also hopes to share with the judges an original song she wrote about the Miss America Organization and defining Miss America.

“That was a lot of fun. I wrote, recorded and published it (the song) in six weeks,” she said. “I won’t be performing it (the song), but I definitely want to ensure the judges know how much that means to me and what my purpose was in writing that song. I am hoping I get to share about it there, and if they ask me to sing it, I will.”

As for the evening gown Perkins will be wearing during the Red Carpet phase of the competition, as with her song choice, she was not at liberty to say much. However, she did share that the gown had not been what she had originally envisioned.

“I had something very specific in mind,” Perkins said.

But when she tried on the gown, which was outside her “rule book,” as she called it, she changed her mind.

“It exceeded all my expectations. When I put on the gown, my mom and I knew it was the one,” she said.

A couple of other hints Perkins divulged about the custom couture Sherri Hill was that it was “classic, timeless, yet edgy all at the same time.” The gown also has crystals that emulate a waterfall.

“My family immigrated from a city called Jezzine, Lebanon, which translates to ‘The City of Waterfalls,’ so it’s like there is a little piece of my family heritage in the evening gown,” she said.

Perkins, along with Miss Louisiana, boarded a plane this past Thursday headed to New York City, where all 51 candidates from across the country participated in a media tour. From there the group traveled by bus to Connecticut, where rehearsals for the upcoming competition will ensue.

“I am so excited to share my story and represent Mississippi,” Perkins said about the Miss America Competition. “That is the heart of why I do what I do for the people of our state and nation.”

The Miss America Competition preliminaries and final night of competition will be available to view at PageantsLive.com and the PageantsLive apps. Preliminaries begin at 7 p.m. ET on Monday, Dec. 12 and Tuesday, Dec. 13. The final competition and crowning will begin at 8 p.m. ET Thursday, Dec.15. A pre-show will begin at 7 p.m. and will feature Emma Broyles, Miss America 2022, Morgan Greco, Miss America’s Outstanding Teen 2023, and musical prodigy and Kawai Young Artist, Ethan Olaes.