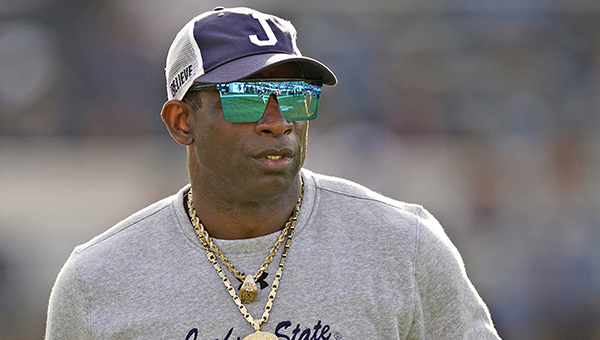 Jackson State football coach Deion Sanders surveys his players during warmups prior to the SWAC championship game on Dec. 3. Sanders announced after the game that he is leaving JSU to become Colorado's head coach. (AP Photo/Rogelio V. Solis)

It’s been a week since Deion Sanders announced he’s leaving the muggy humidity of Mississippi for the crisp mountain air of Colorado.

As fans and media continue to process the news, the one thing that is becoming clear is that the legacy of Sanders’ three-year tenure as Jackson State’s football coach will be … complicated, to say the least.

Was he a savior of SWAC football? A benefactor to the city of Jackson and Jackson State’s athletics program?

Or did he live up to his reputation as a diva performer who made it all about him? A con man who was never doing anything more than playing on a community’s emotions to score a big payday?

Did he accomplish his stated Godly mission of elevating Jackson State and HBCUs as a whole?

Or did he use it as a steppingstone job, no different than any other coach trying to claw their way up the ladder in a difficult profession?

The answer, to all of these, is yes.

Deion Sanders — sorry, I can’t call him “Coach Prime” in a serious, professional setting like this unless he shows he can transform into a tractor trailer — was all of these things.

Sanders undoubtedly drew attention to Jackson State, historically Black colleges, and the SWAC. He reportedly paid for some facility upgrades and program expenses at JSU out of his own pocket. He did a lot of good on that front.

Bringing Sanders to Jackson State was a crazy experiment that appeared to be working.

When he was hired in September 2020, Sanders spoke of becoming Jackson State’s football coach as a much higher calling than simply winning some games.

“A lot of people are going to say, ‘Why?’” Sanders said then. “I’ve been offered pro jobs. I could be an assistant at any college and a head coach at any other college, but at such a time as this God called me to Jackson State and me to these men.”

And then, on his way out the door, he seemed to do everything he could to flush a lot of that goodwill down the toilet.

He left at literally the first big opportunity that came along. He made it clear that one reason he was leaving was because you have to keep moving up the ladder, which went against everything he said he was about at Jackson State.

He complained about the lack of resources at a cash-strapped school. He hinted at disagreements with the university’s administration.

On top of that, he’ll likely loot the roster for talent on his way out of town. All of those five-star recruits he sold on the HBCU experience, and being able to get to the NFL from an HBCU, will likely be told now that they can’t get to the NFL unless they go to a Power 5 program like Colorado.

So how is this different than any other coach who preaches loyalty and tradition and family and love, and then chases the big money of a Power 5 conference job?

It’s not, and that’s the point.

Deion Sanders was building something special and unique at Jackson State. He sold it to everyone as a nobler calling, and everyone believed it. He didn’t need to stay at JSU for another 20 years or five years — or even another minute — to have achieved that.

He could have layered in a couple of recruiting classes. He could have seen at least one class of players cycle through and get a couple to the NFL, like he said he would. He could have downplayed his recruitment of JSU players through the transfer portal, rather than openly campaigning for them to come to Boulder before the ink was dry on his new contract.

He could have proclaimed his mission accomplished and handed the reins to someone else, graciously selling it as giving another Black coach an opportunity to lead a program and move up the ladder.

Even if Sanders was just chasing the money — and at $6 million a year compared to about $500,000 at JSU, no one should hold him to the fire for that alone — there are classy ways to camouflage it a bit. He hasn’t attempted to do any of them.

So Deion Sanders is off to Colorado, where the average life expectancy of a coach’s tenure is less than five years. Maybe he’ll succeed. Maybe he’ll fail and be fired after a couple of 4-8 seasons, just like most other Power 5 coaches.

And that’s the real unpleasantness of all of this. Deion Sanders took on the monumental task of building something bigger than himself at Jackson. He had a chance to be something really unique and special at Jackson State.

In the end, he showed he’s not different at all. He is what he’ll probably end up being at Colorado — just another college coach.