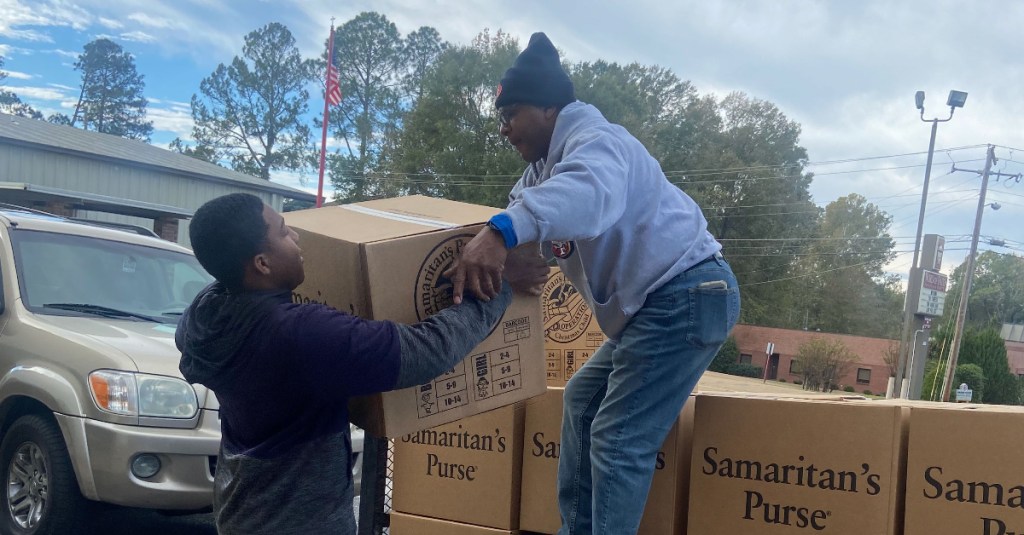 Carl Harris and his son Jarrett load and secure boxes on a trailer at First Baptist Church for shipping to a Samaritan's Purse processing station in Dallas, Texas. (Photo courtesy of Bridgette Harris)

In the summer of 1993, Samaritan’s Purse President Franklin Graham received a call from a man in England seeking his help on behalf of children in Bosnia who were caught in the middle of a brutal civil war and asking for shoeboxes filled with gifts for the children to receive at Christmas.

That first year, Samaritan’s Purse provided 11,000 shoeboxes so children in the war-torn country could enjoy Christmas.

Fast forward to 2022 and the project, now called “Operation Christmas Child,” has grown into a multi-national program.

“Now we have 198 million shoebox gifts sent out all over the world and we’re expecting to have reached 200 million shoebox gifts,” said Bridgette Harris, a member of Word of Faith Christian Center in Vicksburg and area coordinator for 30 churches in Claiborne, Warren and Hinds counties.

“My job throughout the year is to contact churches and get them packing,” she said. “It doesn’t matter your denomination; any church can pack. That’s the bread and butter of Samaritan’s Purse’s Operation Christmas Child, getting churches to pack; individuals pack, groups pack, but most shoebox gifts come from churches.”

Besides working with her church and the other team members in the area, Harris talks to churches about participating in the program.

Locally this year, she said, the participating churches in the three-county area packed and delivered 21,246 shoeboxes. Her church, Word of Faith, packed 5,043 shoeboxes.

The shoebox can either be a cardboard box or a plastic box the size of a shoebox that churches can order, and finding items to fill the boxes and packing them, Harris said, is a continuous job.

“We do it all year. In order to do 5,000 boxes, we started actually in December of last year and we packed all year round. It was a group effort with our church members. We hit every sale everybody had,” she said.

“I’m always trying to find sales,” Harris added. “I’ll be in a store with two baskets. People look at me and ask me, ‘What are you doing?’ I explain why I’m doing it and explain Samaritan’s Purse. That’s a good way to get other people involved.”

“You have to decide whether you want to pack for a boy or a girl,” she said.

The boxes cannot include war-type toys, like weapons, and no liquids.

“When we pack, we have what we call a wild gift, which is usually a toy; we do school supplies because there are a lot of children in these countries who cannot even go to school unless they have school supplies,” Harris said.

“We do clothing, hygiene supplies and put shoes in the box because a lot of kids don’t have shoes. We encourage people to do the school supplies and whatever else lays on their heart to pack,” she said, adding people have packed coats and other clothing in the boxes. She said people can go to the Samaritan’s Purse website to learn how to pack a box.

Some boxes, Harris said, are called “special boxes” that go to what are referred to as sensitive countries.

“They don’t have anything on them; it’s a plain red box sent to different countries and no Christian-related items because Samarian’s Purse will complete the packing,” she said.

“These are the areas where the people have never known Christ; they’ve never heard Jesus. Samaritan’s Purse has built a relationship with the countries and that is why they do those boxes.”

She said 7,000 special boxes were packed.

When they’re completed, the boxes are taken to First Baptist Church, which serves as the central drop-off site for the area’s boxes.

“Most of the churches do their packing the first of November,” she said. “They start coming into us on what they call ‘National Collection Week’ and that’s the second week in November. And at the end of this week is when we start receiving boxes from these large locations.

Sills said the men from Renewal House assisted with loading the trucks, estimating they moved about 35 tons of shoe boxes.

The boxes are shipped to a processing center either in Dallas, Texas, or Atlanta, Ga. There, Harris said, the shoeboxes are checked to ensure they are packed properly and there are no inappropriate items before they are shipped to one of the foreign countries. She said someone can follow their box by scanning the QR code on the box.

“The first day of collection (this year) we had 10,000 shoeboxes,” Harris said. “They filled the trailer; we had half our number on the first day.

“That was exciting to know and I’m so glad more and more churches are beginning to pack more and they get the understanding that this is a great way for a church to do outreach,” she said.