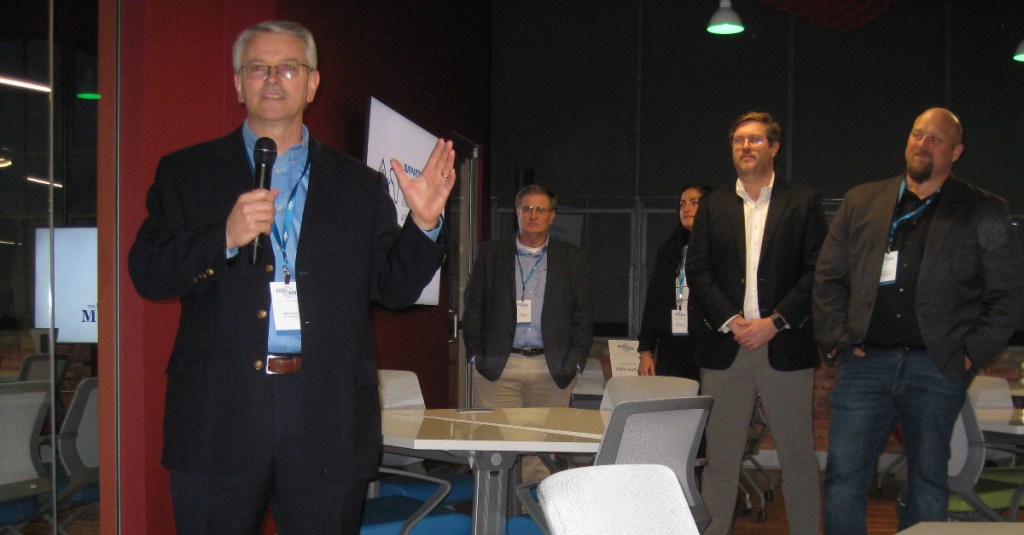 U.S. Army Research and Development Center Director Dr. David Pittman addresses people attending a meeting of the ERDC Board of directors and the Mississippi Consortium. (Photo by John Surratt | The Vicksburg Post)

“We can’t get anything we do done without partners,” Pittman said during a break in a Thursday meeting of ERDC’s Board of Directors and the Mississippi Consortium, which represents the state’s colleges and universities, at the Thad Cochran Mississippi Center for Innovation and Technology, or MCITy.

“Our primary mission is research and development so we need partners in academia, industry, even state and local government support and internationally to get done what we do because literally, we don’t have enough people to get it done ourselves.”

ERDC, Pittman said, is growing and its workforce will be expanding “but not as fast as our research programs are growing. So it’s going to be more important to have relationships like we have here with MCITy, with the research consortium and partners in industry and in the local government.

ERDC has a program to help develop those partnerships — ERDCWERX, which occupies the third floor of MCITy, has a mission to cultivate a vibrant ecosystem and shape successful alliances to innovate and commercialize technologies that support the warfighter.

“It’s very important to have ERDCWERX; we started with them about 4-5 years ago,” Pittman said. “They’re the kind of interface between us and the bigger community out there.”

ERDCWERX’s residence in MCITy is critical as far as being in a position to develop partnerships and collaboration between ERDC and other organizations.

Being at MCITy as opposed to being on ERDC’s campus, or anywhere else, he said, puts ERDCWERX in a good position to develop relationships with the state’s colleges and universities. Mississippi State, Jackson State, Ole Miss, the University of Southern Mississippi, Alcorn State and Hinds Community College, he said, will all have representatives at MCITy.

“There’s something about proximity; everybody being here together to promote that entrepreneur and technical innovation spirit,” he said. “We’ve got tons of stuff coming out of ERDC; a lot of brainpower there, a lot of capability. Now it’s time to leverage the private sector and academia and others to help us get all that done. That’s what we’re working for.”

ERDCWERX, Pittman said, can provide the mechanisms to work with others.

“Their true function is to help you collaborate and get to how we can work together without necessarily having a contract first,” he said. “ERDCWERX, that’s what they’re for; Congress gave it that kind of ability to have those kinds of conversations and collaborations without a contract yet. It builds collaborations.”

He said ERDCWERX is doing much of the work ERDC’s staff had to do in the past.

“They’re experts at this; they can go out and find the right industry, the right partnership we need,” Pittman said. “We’ve got a worldwide mission. If they can help us do that, and then help attract industry here because they want to be where the action is so it’s going to be good for not just the nation, the Corps of Engineers and their mission, but Warren County and the state of Mississippi and ERDC’s other labs.”