Leach remembered for wit, personality, intelligence as much as for football 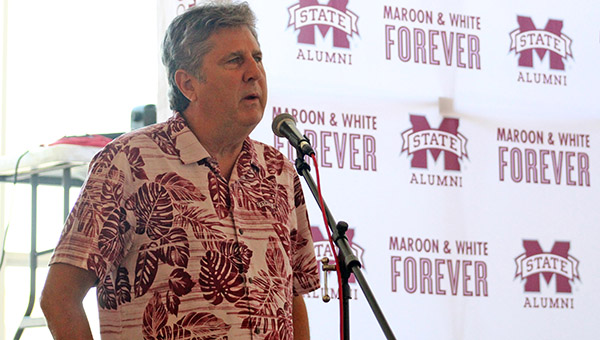 One day, during a Mississippi State practice, players were preparing for a drill when they noticed head coach Mike Leach wasn’t around.

“We were supposed to go to screen period, but he was over there on the phone. What happened was that Donald Trump called him during practice and he was talking to him,” former Mississippi State offensive lineman Reed Buys said.

Another time Buys, a Vicksburg native who recently transferred to South Alabama, recalled Leach being on his phone at practice for a different reason.

“One time we were at practice and he had his earphones in off to the side. We were like, ‘What is he doing?’ He was learning Spanish on his phone,” Buys said with a laugh. “He was such an interesting guy. Everybody has a thousand different stories of Coach Leach and they’re going to live on forever.”

Indeed, it seems everybody has a story about Leach that — in fitting with his unique character — is only marginally related to football.

Leach died Monday night at age 61, following complications from a heart condition. The man who coached Mississippi State’s football team the past three seasons was as famous for his innovative Air Raid offense on the field as he was for his rambling, entertaining tangents during interviews.

Tributes from former players, and coaches he worked with and against, poured in across the country since Leach was rushed from Starkville to University of Mississippi Medical Center in Jackson on Sunday.

Eight current FBS head coaches played for Leach or were on the coaching staff with him at various posts. Many posted photos and tributes to him on social media on Tuesday.

Ole Miss coach Lane Kiffin, whose Rebels Leach beat on Thanksgiving for the last of his 158 career victories, spoke often in the lead-up to the Egg Bowl about their long friendship built over the course of their careers.

“I truly loved Coach Leach and every minute I shared with him,” Kiffin posted on Twitter on Tuesday. “Going back to our years together in the Pac-12, I have always felt tremendous respect and admiration for Coach, his unique personality and his innovative mind, and I can’t imagine college football without him. I’m grateful to be part of his final win, hug him and watch him walk off like the winner that he is. I know God is welcoming the Pirate home now.”

Leach’s influence on the college football landscape, in recent years at least, flowed from his one-of-a-kind interviews and style that suited a man nicknamed “The Pirate.”

When Leach was hired at Mississippi State from Washington State in 2020, the plane did not go west to pick him up. It went south to Key West, Florida, where he had his offseason home.

His entertaining takes on Halloween candy, weddings and Pac-12 mascot battle royales during interviews became legendary — and were not limited to those settings.

During a June 2021 visit to Vicksburg with the Mississippi State Road Dawgs Tour, Leach shared a hazy childhood memory of passing through the city on a family road trip, then quickly diverted from football-related topics to answer fans’ questions about tailgating at Dudy Noble Field and the Hawaiian shirt he was wearing.

John Reid Golding, whose family owns Golding Barge Line, Inc., and has deep ties to Mississippi State’s athletic program, said Leach had planned a return to the city on a bit of a personal field trip.

Golding’s family also hosted Leach on a hog hunt near Port Gibson earlier this year. He said it gave him a unique glimpse of a man who could hold court on any topic imaginable.

“You almost had to think real thoroughly about what you wanted to ask him, because he was going to give you a 20-minute answer and you weren’t going to be able to jump in there. But it was a very entertaining and funny answer, usually,” Golding laughed. “He was one of the most all-around intelligent guys myself and my family have ever been around. Just a sincere, nice, humble guy.”

Buys said Leach was like that on the job, as well.

“In team meetings he could go on a rant for 45 minutes of something that wasn’t even related to football, but then he’d bring us right back,” Buys said.

Buys added that, while Leach had plenty of eccentricities, he also had an old school streak when it came to football.

Leach preached hard work, which is what drove him to be as successful as he was — and what made his players a success as well.

“He was really an awesome coach. He’s a legend. Everybody loves him. Playing for him was definitely a great experience,” Buys said. “He’s a hard-nosed coach. He was going to get the best out of you. He definitely got the best out of me. He made everybody great around him. I consider it a blessing to be able to experience playing for a coach like him.”